By Muthomi Thiankolu - The Conversation 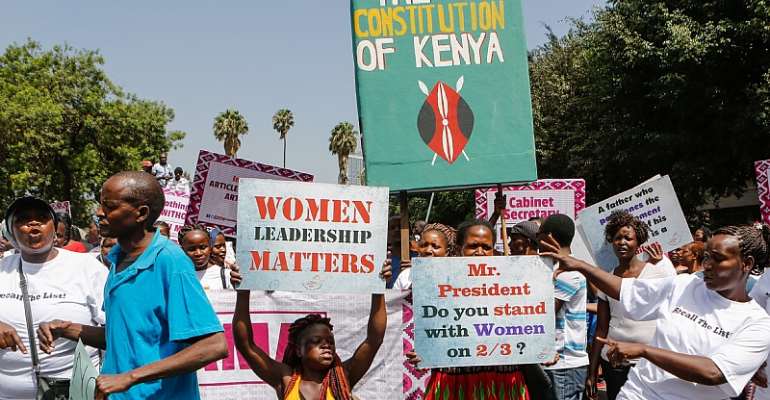 The constitutional requirement for better gender balance in Kenya&#39;s institutions has been delayed for years. - Source: Daniel Irungu/EPA-EFE

Its interpretation and application, therefore, requires a value-centric approach that takes account of the historical, social, cultural and political contexts of the country. Gender representation falls squarely into these categories.

The 2010 constitution calls for the elimination of all forms of gender-based discrimination and marginalisation. Article 27 (8) requires the state to take policy, legislative and other measures, including affirmative action programmes, to ensure that “not more than two-thirds of the members of elective or appointive bodies shall be of the same gender”.

Article 81 (b) provides that

not more than two-thirds of the members of elective public bodies shall be of the same gender.

The 2010 constitution required parliament to enact a new law to give effect to this gender provision within five years of its promulgation. Despite six court orders directing it to do so, parliament has yet to enact the law .

The drafters of the constitution may have foreseen this because they also prescribed the dissolution of parliament, as many times as it takes, until the house fully complies with the requirement. As a result, Chief Justice David Maraga recently advised President Uhuru Kenyatta to dissolve the house as per Article 261 of the 2010 constitution.

The drafters of the 2010 constitution foresaw the likelihood of resistance and frustration of the transformative agenda by the beneficiaries of Kenya's pre-existing social, economic and political structures.

Therefore, they established a default mechanism, comprising four sequential steps, the last of which is the dissolution of parliament by the president in accordance with the advice of the chief justice.

This triggered a petition at the High Court under Article 261 (5) of the 2010 constitution.

In June 2015, the High Court ordered the attorney general and the Commission for Implementation of the 2010 Constitution to table a bill before parliament within 40 days. Again, despite the order, parliament did not enact a law. This led to another High Court case on the matter.

In March 2017, the High Court held that parliament's failure to enact the two-thirds gender law within the prescribed period violated women's rights and was a gross violation of the constitution. It further held that continued noncompliance would render parliament unconstitutional.

The court issued an order directing parliament and the attorney general to ensure that parliament enacted the required legislation within a period of 60 days, that is, by May 29, 2017. It also held that if parliament failed to enact legislation within the 60 days, any person would be at liberty to petition the chief justice to advise the president to dissolve parliament.

Parliament failed again. It did not enact a law to implement the two-thirds gender rule within the 60 days and instead appealed against the court's decision.

In April 2019, the Court of Appeal dismissed parliament's appeal against the High Court's decision, and held that its continued failure to enact the gender law would result in its dissolution.

Implications of the chief justice's advice

In September 2020, the chief justice advised the president to dissolve parliament in accordance with Article 261 (7) of the constitution. His advice was based on parliament's failure to enact a law to give effect to the two-thirds gender rule.

It was preceded by six petitions , all urging him to advise the president to dissolve parliament in accordance with the constitution.

A few questions have arisen following the chief justice's advice, as follows:

The dissolution of parliament will render all offices of members of the national assembly and the senate vacant and trigger parliamentary elections within 90 days . Dissolution will also mark the end of the term of the current parliament.

What does the constitution state about gender balance? The 2010 constitution requires equality of men and women in all spheres of life, and the elimination of all forms of gender-based discrimination and marginalisation. Parliament has cited lack of quorum and consensus as the main obstacles to the enactment of a law to give effect to the two-thirds gender rule. But the real obstacles are the patriarchal gender stereotypes that characterise Kenyan society.

How can the constitutional impasse be resolved? Although the current impasse revolves around the enactment of a gender law, the 2010 constitution requires a blend of legislative, policy and administrative measures. The government can take these measures to implement the rule pending the enactment of the required law. The judiciary and the executive can be reconstituted to comply with the rule without a law.

The chief justice's advice might affect the president and his government in three main ways.

First, refusal to dissolve parliament or any unreasonable delay in so doing will open the president to accusations of breach of the 2010 constitution, and complicity in parliament's failure to enact the required law.

Second, the chief justice's advice will negatively impact the validity and legitimacy of the administration in respect to matters that require parliamentary approval and oversight. The house does not have the constitutional and legal mandate to act.

Finally, transactions conducted by parliament between the date of the chief justice's advice and the date of dissolution could easily be challenged in court and declared null and void.

Muthomi Thiankolu does not work for, consult, own shares in or receive funding from any company or organisation that would benefit from this article, and has disclosed no relevant affiliations beyond their academic appointment.

By Muthomi Thiankolu, Lecturer, School of Law, University of Nairobi

‘We’ll go hungry if we stop light fishing’ – Fishermen in El...
32 minutes ago