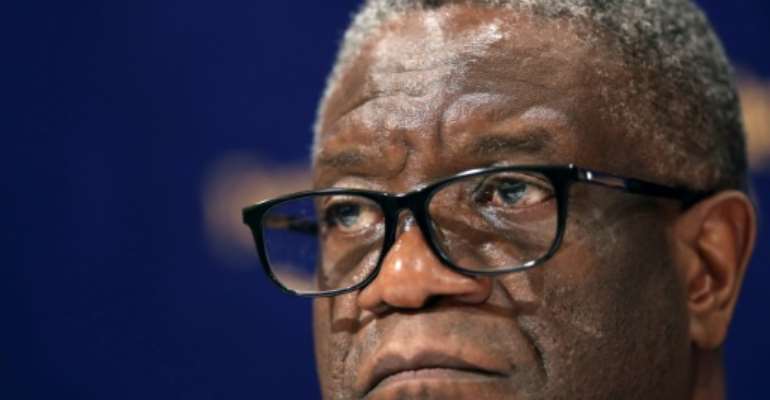 Nobel Peace Prize winner Denis Mukwege is campaigning for an end to impunity for those behind massacres in his native DR Congo. By Behrouz MEHRI (AFP/File)

Nobel Peace laureate Denis Mukwege was expected to join protests on Thursday demanding justice for decades of rapes and killings in the east of his native DR Congo.

The gynaecologist and surgeon received death threats earlier this year for campaigning for rights abuses committed during the two Congo Wars, between 1996-98 and 1998-2003, and the following bloodshed that still afflicts the country's east.

But that has not stopped Mukege passionately speaking out ahead of planned protests in several towns, including Bukavu, the capital of South Kivu province where he runs his Panzi Hospital to treat thousands of victims of rape.

The protests will mark the 10th anniversary of a United Nations report that outlined "the most serious human rights violations" surrounding the two wars.

But its recommendations have been widely ignored, including the creation of an international criminal tribunal for the Democratic Republic of Congo.

"We deplore that not a single initiative has taken shape to date to implement these recommendations," Mukwege wrote in the French daily Le Monde on Thursday, in a commentary co-signed by Louise Arbour, ex-chief prosecutor for the international criminal tribunals for the former Yugoslavia and Rwanda.

Justice is vital "to break the cycles of violence and instability," said Mukwege, who shared the 2018 Nobel Peace Prize for his work against sexual violence in war.

He noted that more than 1,300 people were killed in the first six months of 2020 in the three eastern provinces of Ituri and North and South Kivu, according to a tally compiled by UN sources.

The doctor said he regretted that former militia fighters had been integrated into the country's regular armed forces during programmes aimed at demobilising armed groups.

"Promotions were given to those who should answer for their actions before national or international justice," Mukwege said.

It is a serious issue of debate in DR Congo as President Felix Tshisekedi reaches out to numerous Congolese armed groups operating in the east.

Some have responded to his call for peace by presenting demands, mostly for amnesty and further integration of their fighters into the armed forces.

Mukwege said the long-ignored UN report describes "617 violent incidents that could be qualified as war crimes, crimes against humanity, even crimes of genocide, if the facts are brought to the attention of a competent tribunal."

American NGO the International Rescue Committee estimated that 5.4 million people perished in the fighting between 1998 and 2007.

That figure has been challenged by population experts but it stuck in the minds of many Congolese, convinced that the fighting in the east left six million dead.

The UN report also denounced the involvement of neighbouring Rwanda and Uganda in the bloodshed.

But Rwanda's opposition to a special court for DR Congo has remained unchanged.

Your independence will be respected – Akufo-Addo assures new...
21 minutes ago

He has the capacity, intellectual strength to succeed – Akuf...
26 minutes ago