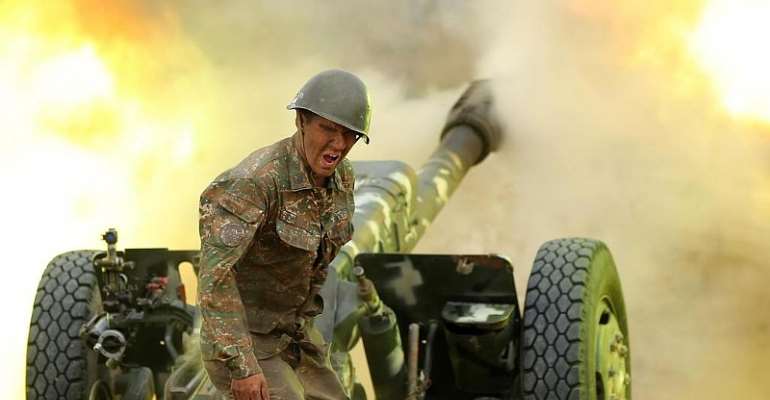 French President Emmanuel Macron has said he is convinced Syrian jihadist fighters are operating in Nagorno-Karabakh, where Armenia and Azerbaijan are engaged in heavy fighting.

"We have information that indicates with certainty that Syrian fighters from jihadist groups have transited through Gaziantep to reach the theatre of operations in Nagorno-Karabakh. This is a very serious new fact, which changes the situation," Macron said as he arrived for a summit with other EU leaders in Brussels.

The Russian Interfax News Agency on Monday quoted the Armenian Ambassador to Russia, Vardan Toghanyan, as saying that "Turkey has relocated some 4,000 militants from northern districts of Syria to Azerbaijan," to help Turkish and Azeri troops fighting Armenian forces in the Karabakh region.

But Omar Celik, a spokesperson for Turkey's AKP Party rejected the claim as a "lie."

The presidents of Russia, the United States and France called Thursday for a ceasefire in the Nagorno-Karabakh region, urging Armenia and Azerbaijan to commit to talks without delay or preconditions.

"We call for an immediate cessation of hostilities between the relevant military forces," French President Emmanuel Macron, his Russian counterpart Vladimir Putin, and Donald Trump of the US said in a statement released by the French president's staff.

"We also call on the leaders of Armenia and Azerbaijan to commit without delay to resuming substantive negotiations," said the leaders, whose countries are the co-chairs of the OSCE Minsk group that has sought a solution to the conflict since the 1990s.

The statement said such taks should be "in good faith and without preconditions" and be held under the auspices of the OSCE Minsk Group.

The Minsk group, which was created by the Organization for Security and Co-operation in Europe (OSCE) in 1992, has on occasion overseen summits between Armenian and Azeri leaders but has failed to find any lasting resolution to the conflict.

The fiercest clashes between Armenian and Azerbaijani forces in years over the region erupted last Sunday. The number of confirmed deaths neared 130 as fighting raged for a fifth day.

The rival Caucasus nations have been locked in a bitter stalemate over the Karabakh region since the collapse of the Soviet Union, when the ethnic Armenian region broke away from Azerbaijan.

Karabakh's declaration of independence from Azerbaijan sparked a war in the early 1990s that claimed 30,000 lives. The region, which is controlled by ethnic Armenians, is not recognised as independent by any country, including Armenia.