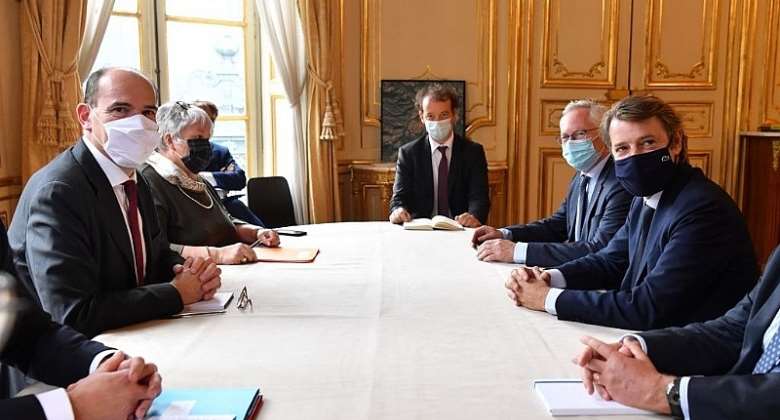 French Prime Minister Jean Castex has said there would be no immediate tightening of Covid-19 restrictions after discussions with mayors of five major cities. The meeting was called after Marseille's mayor slammed as "incomprehensible" and "disproportionate" last week's decision to force bars and restaurants in the southern city to close.

The other meetings, with Grenoble's Eric Piolle and Jean-Luc Moudenc of Toulouse, were held via video links.

Castex discussed the Covid-19 situation with the mayor of Marseille Michèle Rubirola on Wednesday.

The prime minister reassured the mayors that no new restrictions would come into force for the next 15 days, but that the numbers would be closely scrutinised.

The meetings came ahead of the health minister Olivier Véran's weekly Covid press conference, due at 6pm local time on Thursday.

Despite speculation of harsher measures, Véran is not expected to announce a change to the alert classification of major French cities, but instead emphasise the importance of maintaining the restrictions already in place and appeal to citizens' sense of responsibility.

The government has been accused of insufficiently consulting local representatives on handling the crisis, a point that was raised during a meeting on Wednesday with the Association of French Mayors (AMF), headed by François Baroin.

Last Thursday, politicians and business owners in Marseille and Aix-en-Provence reacted angrily to the government's announcement that the area would face tougher restrictions, including the total closure of bars and restaurants for at least 15 days.

Michèle Rubirola pointed to the extreme economic burden placed on a sector which had already suffered from the lockdown in March and a slow tourist season in summer.

In response to these concerns, economy minister Bruno Le Maire announced a financial aid package for restaurant owners in the areas forced to close, promising relief funds between 1,500 and 10,000 euros per month and full coverage of pay to temporarily laid-off staff to the end of the year.

Aix-en-Provence and Marseille, along with the island of Guadeloupe are, for the moment, the only two regions classified as 'maximum risk' due to the spike in the number of Covid-19 cases, and the number of hospitalisations.

The major cities of Lille, Toulouse, Saint-Étienne, Paris and its inner suburbs, Rouen, Grenoble, Montpellier and Rennes are all currently classified as on 'reinforced alert', the second highest category.

In these cities, restaurants and bars have been ordered to close at 10pm, and fitness clubs and gyms have also had to close.

Eric Piolle, the mayor of Grenoble, said prior to the meeting with Castex that he understood why it was necessary to prevent hospitals from becoming overwhelmed, but said that the government had not consulted regional representatives enough on the situation.

He also said it was important to interpret the statistics in more detail and carefully adapt the response to each situation.

“The government must be more coherent in its message,” he stressed.

“For example, when we close bars, students don't understand why they're not allowed to have fun, so they'll organize parties in private spaces which the police will not be able to control,” he says.

The mayor of Lyon, Grégory Doucet said his exchange with Castex was “cordial and republican” and that they agreed on the main points over handling the crisis, but he echoed Piolle on the need to have a better understanding of the data before rushing to enforce blanket rules.

He requested that the regulation concerning the closure of bars at 10pm be lifted, a measure which is to be discussed with the head of police on Friday.

Martine Aubry was content to announce that the greater Lille area would stay in its current classification for the time being, and see no further restrictions for the next 15 days, unless the situation dramatically worsened.

"We will do everything we can," Martine Aubry told French media, "to tell people to 'be careful, this is very serious, please respect the rules,'" so that we don't end up having to close all bars completely as in Marseille.

How does the government decide on the zones?