The Dokua Factor In Women Politics 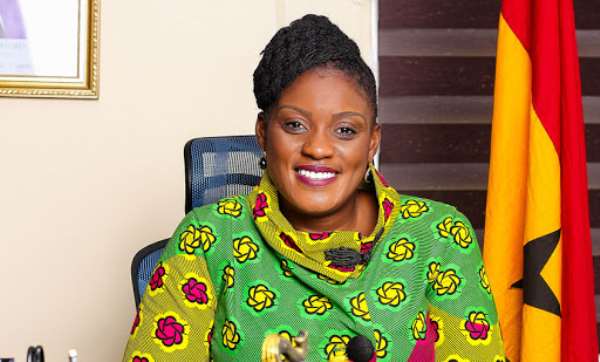 Ghana's Political struggle for independence and partisan Politics has been silent on the role of women. The name of Rebecca Naa Dede Aryettey a famous political female guru in the Nkrumah CPP is always silent and Several people do not even know her image is on the 50 Ghana Pesewas.

The Traditional Ghanaian society by default has relegated women to a more silent Edifice, the home.

Men have always taken a certain entrenched position as the movers of various facets of society thus, Politics and governance, technology, construction, etc..

There have been several civil society groups that have been serious advocates for women empowerment and Emancipation.

In the recent past, there has been a revolution of women conspicuity, and that the role of women recently cannot be downplayed.

A woman worthy of Mention is Nana Ama Asiamah Agyei Dokua..the Deputy Minister of Information and the member of Parliament for Akuapem North Constituency.

For the purpose of this write-up, I will dwell on the Name Dokua.

To my readers, Dokua an Akuapem has Akyem as her kinsmen and her name Dokua was named after a brave woman warrior of the Akyem people who in the history of Akyem was the only Queen-King that ever lived. That is, in the History of Akyem, she was once a Queen Mother and a King at the same time. This feat is not a mean achievement.

Dokua "Abire" as she was affectionately called embarked on a series of wars of conquest and consolidated the gains of Akyem Abuakwa.Akyem Abuakwa became a cradle of development and was seen as a state of civility.

Again, it was under her rulership that she ordered the Akyem Wankyihene who doubled as the Osewuohene of Akyem Abuakwa to give out lands to Akyem Kotoku for their present settlement.

Aberewa Dokua was a woman par excellence and her diplomatic skills and her humanistic instincts made Akyem a hospitable enclave to live.

It is Worthy to note that names have consequences and it is not surprising that the current Ama Dokua of Akropong is exhibiting some qualities that were features of the Aberewa Dokua of old.

she has denied the old age mentality that politics is a male-dominated career. Her Political prowess is glaring for all to see.she has distinguished herself in the male-dominated area..her diplomatic skills have resulted in the elevation of the Akuapem area with several developments including the construction of schools, clinics, provision of boreholes, and the most important achievement of funding education for several people in tertiary Institutions. This and many others were made possible by her diplomatic Tendencies.

Akuapem North Constituency is now a home for most of the People and her readiness to accept you is a hallmark of an exceptional leader.

Her bravery can be likened to her "Greatest" Grandmother and has made her survive in the vigorous Ghanaian politics and still growing stronger.

No wonder at her youthful Age she's now a role model for most Ghanaian young girls.

Ama Dokua, your name is a name of historical relevance and you have not disappointed your Greatest