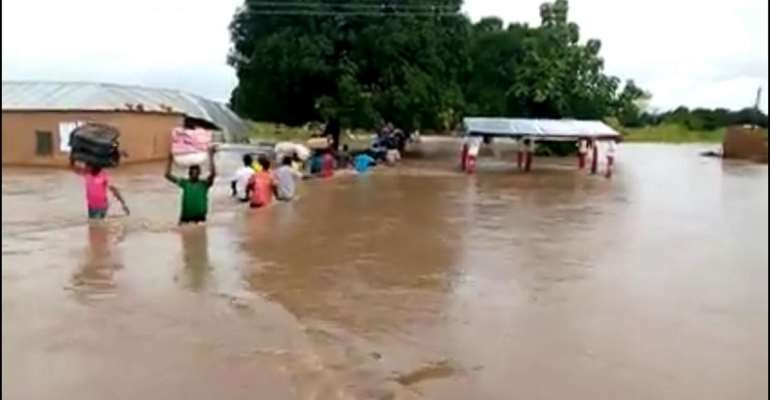 Information reaching this portal indicates that heavy downpour has led to two dams overflowing their boundaries in some parts of the West Mamprusi municipality.

The flood has resulted in over 1,500 people being displaced.

About hundreds of houses in the municipality have as well been submerged in the floods.

DGN Online gathered that two dams in the municipality namely Diani and Guabullga overflowed submerging houses and causing severe damages to properties in the communities.

He indicated that affected persons were being rescued to Walewale township to accommodate them temporary.

“ In Walewale we some newly constructed school that are not in use because schools are not in session that we will move them into temporary.”

He said the assembly is trying to redirect the water from the dams and also rebuild them as soon as possible.

Several communities including Sakogu, Nakpanduri, Bunkpurugu,Yunyoo have been cut off due to submerging of the bridge the links the communities to West Mamprusi municipality.

An assessment team made up of NADMO (Regional and District MMDA level), Environmental Health (Regional and MMDA level), WFP, UNICEF, PLAN Ghana, Global Communities indicated in their reports that about 55,235 persons have been affected in the heavy downpour and resultant floods in addition to the spillage of the Bagre dam with 206 communities affected and nine persons confirmed dead in the North East Region.