President appeals to teachers to call off strike 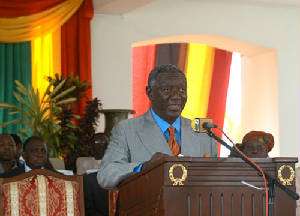 President John Agyekum Kufuor has appealed to the National Association of Graduate Teachers (NAGRAT) to call off its strike action and go back to the classroom.

He said it is important for all to be self-restraining in demands for better conditions of service and avoid holding the entire nation to ransom.

President Kufuor was speaking when he dropped in at the Conference Hall of the Ministry of Information and National Orientation to listen to questions at a press conference on the matter.

President Kufuor said the government is not insensitive to the issue of poor wages and salaries but the truth is that the space of the economy as it was now is narrow.

He had therefore expected that his invitation for a public debate on salaries would inspire various learned institutions to take up the challenge to analyse the pay structure, take a critical look at the national revenue and come out with suggestions on the way forward.

He said as the government search for ways and means to improve the situation and to make things better for the worker, "we must hold ourselves together and should be careful not to disrupt the effort".

President Kufuor gave the assurance that the government would neither discriminate nor cheat any worker saying, it is important for all to appreciate that it would not be in anybody's interest if the economy is brought to its knees.

He used the occasion to set the records straight on the recent salary structure for health workers that has become a reference point and the main cause of agitation among teachers, civil servants and other public sector employees and said they have not been given any new pay package.

President Kufuor said all that the government did was to consolidate the Additional Duty-Hours Allowance (ADHA), which was a strain on the economy.

That, he said, was based on a well-calculated advice by consultants, adding that through the consolidation, some money has been saved.

He said the country's economy would have stagnated by next year if the system as it operated had been allowed to continue.

Meanwhile the Ashanti Regional Students' Representative Council (ARSRC) has expressed its disappointment and dismay at the inability of the government and stakeholders of education to resolve the four-week old industrial action by the graduate teachers in second cycle schools.

The Council said the strike action has resulted in total anarchy, confusion, chaos and disorder in the various schools within the region and beyond, adding that a visit to the schools indicates disillusioned, confused and disoriented students loitering about.

The students concerns were contained in a statement read by Master Jonathan Acheampong, a student of Kumasi Academy and President of the Council at a press conference in Kumasi.

The Council comprises student leaders of all the various second-cycle schools in the region.

"We are by this statement calling on parents and all well-meaning Ghanaians to help us in voicing out our predicament, for instance the West African Senior School Certificate Examination (WASSCE) is just around the corner and once again final-year students have been left to their fate as it occurred to some students some years back".

The Council said, "We students are not interested in who is right or wrong in the issue, neither are we interested in legalities, our concern is all about getting our teachers back to the classroom to teach".

"Indeed the grass is suffering as two elephants continue to fight. Helpless students are compelled to pay huge and exorbitant tuition fees to receive extra classes in their bid to prepare adequately for examinations.
“This extra burden on parents who have paid the full fees of their wards in school is unacceptable and this calls on the government and stakeholders of education to understand our plight".

The Council threatened that if by October 18, the government, Ministry of Education, Science and Sports, Ghana Education Service and leadership of NAGRAT do not resolve the action for academic work to resume, they would embark on series of actions to compel concerned bodies to end the strike action.

Their counterparts in Accra have similarly appealed to government and the graduate teachers to speedily resolve the issues that have led to the strike.

At a press conference in Accra to express the frustrations of students of second cycle schools for being neglected by their teachers since schools re-opened, Master William Boye, Regional SRC President, said students for some time now had been treated unfairly.

This is because strikes by members of NAGRAT have become an annual ritual while students are also fed up with the many strikes and asked the government to be sensitive to the plight of teachers.

He said Ghanaian students would be writing the same West Africa Senior Secondary Certificate Examination with colleagues from the West Africa Sub-Region from April 2007 irrespective of whether they had completed their syllabus or not.

"The examinations are not in anyway marking time with NAGRAT's strike action," he said, and urged both the government and NAGRAT to consider the plight of the students.

Meanwhile the National Students of Ghana Students have served notice it would embark on demonstrations if the impasse is not resolved by close of work Friday.