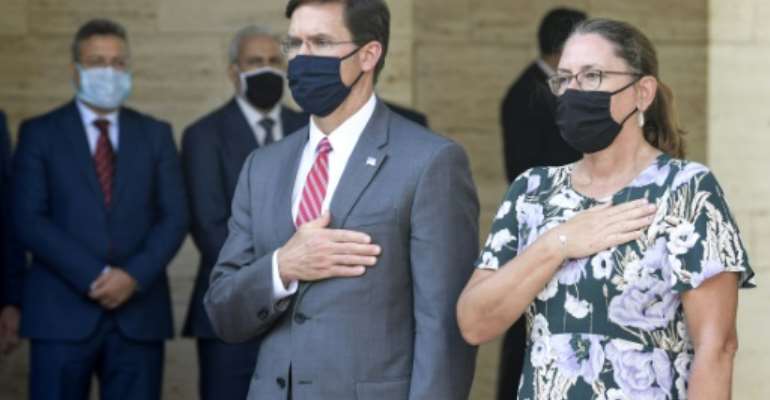 US Defence Secretary Mark Esper and his wife Leah are on a three-nation North Africa tour. By FETHI BELAID (AFP)

US Secretary of Defence Mark Esper heads to Algeria Thursday to bolster ties, as the North African nation tries to mediate in war-ravaged Libya and Mali while battling extremists at home.

Esper, the first defense secretary to visit Algiers in almost 15 years, hopes "to deepen cooperation with Algeria on key regional security issues, such as the threat posed by extremist groups," a senior US military official said.

Esper, due in the country as part of a North Africa tour, will arrive in Algiers after talks in neighbouring Tunisia, before heading to Morocco.

US military officials frequently visit Tunisia and Morocco, where defence cooperation with Washington is well established.

But Esper will be the first defense secretary to visit Algeria, an ally of Russia and China, since Donald Rumsfeld in 2006.

He is expected to be received Thursday by Algerian President Abdelmadjid Tebboune -- who is also defence minister and head of the armed forces -- and with the Chief of Staff, General Said Chanegriha.

"Strengthening this relationship is very important to us," Townsend said.

"Degrading violent extremist organisations... and enhancing regional stability is a mutual must."

Algerian President Abdelmadjid Tebboune is due to meet US Secretary of Defence Mark Esper on Thursday in Algiers. By RYAD KRAMDI (AFP)

The US and Algeria have historic ties -- a treaty of friendship was signed in 1795 -- while during the 1954-1962 war of independence from colonial rulers France, Washington reportedly pressured Paris to negotiate with Algerian nationalists.

"The United States has a strong bilateral security relationship with Algeria that dates at least to the early days of the Global War on Terror," said Michael Shurkin, from the California-based RAND Corporation policy think-tank.

"Their partnership has regional implications."

Algeria was one of the first countries to offer the US support after the 9/11 attacks in New York.

But the US relationship is crucial for another reason, Shurkin noted.

Washington is also likely interested in selling weapons to Algeria, which currently receives some 90 percent of its supplies in this segment from Russia.

Just ahead of Esper's planned visit, Chanegriha met with a top Russian military delegation for discussions on the state of "military cooperation between the two countries," Algeria's defence ministry said in a statement.

Kedidir, the political scientist, said Esper's visit was only a first step for the US.

"It's a long-term job that cannot be settled in one visit," he said.