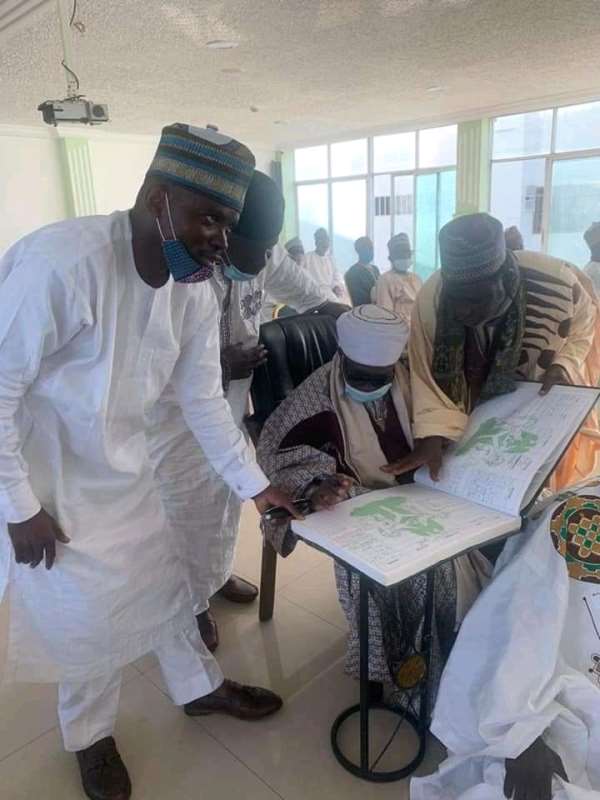 The Greater Accra Zango Chief, Sarki Yahaya Hamisu Baako, over the weekend joined other prominent members of the society paying tribute to the late Emir of Zazzau of Kaduna State in Nigeria, Shehu Idris by signing the book of condolence in his honour.

The Accra Zango Chief signed the book of condolence at a short meeting which was specially arranged for him and the Nigerian High Commissioner at the Embassy in Accra.

Addressing the media at the sideline of the event, Sarki Hamisu Baako, stated that may the death of Zazzau Chief bring peace and honour to the people of Zazzau, Zaria in Kaduna State and other Hausa Chiefs around the World and may his kindness and support to humanity, peace and dedication be emulated by all Chiefs in Nigeria and Africa.

Briefing the media on how the people of Hausa migrated from Nigeria to Ghana to establish Zango, Alhaji Mohammed Ashkah a cabinet member of Greater Accra Zango Chief revealed that the people of Hausas can be traced in the entire Northern Nigeria and migrated into Ghana and other Africa Countries.

According to him, history has it that Hausa people are the largest ethnic group, not only in Nigeria, but also in the entire West Africa.

This among others he said call for the need for them to express their condolences to the late Chief of Zazzau to tight the relationship between their brothers Nigeria.

In attendance were Chief of Zanfara Community, Zango Chief of Ablekuma Agape Gone, Emir Sharif Adam (Sarki Gadafi) and host of others.