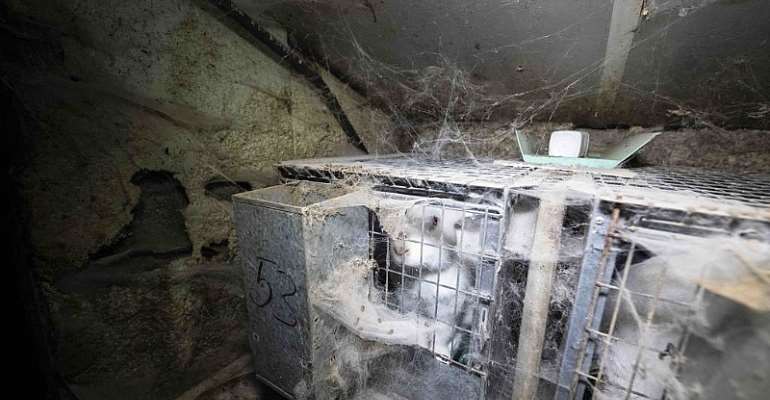 Animal rights activists have released images of rabbits kept in overcrowded cages at a farm in Brittany, in the hope of influencing French MPs who begin debating proposals to improve conditions for farm animals on Thursday.

Ahead of a parliamentary debate on proposals to improve conditions for livestock in France, animal rights campaigners released images taken from a farm they said houses more than 40,000 rabbits in small cages in the western Brittany region.

Images show rabbits packed into small cages arranged in long rows, some of them covered in cobwebs. Other walk on waste or lay dead in trash bins or on floors covered in filth.

“The floors are grills and there's not enough space for the rabbits to stand,” says Sébastien Arsac, co-founder and spokesperson of L214, which takes its name from the section of the French rural code, which describes animals as sentient beings to be treated with respect.

“The rabbits spend their whole lives in this building, with no possibility of stepping outside. By the time they are sent to the slaughterhouse, they will have never breathed fresh air, felt the rays of the sun or lived the life of a rabbit.”

Arsac describes conditions where females are artificially inseminated and give birth every 42 days for lifespans of up to two years, while nearly a quarter of young rabbits die before reaching the age of slaughter, despite being heavily loaded with antibiotics.

“According to mortality records, nearly 300 rabbits die at this farm every week,” the group said.

No laws to protect rabbits

In addition to drawing attention to the conditions on the farm as MPs prepare to debate proposed animal rights legislation, L214 hopes to underline that there are no laws in place to address such abuses.

“There are laws for hens, cows and pigs, but not rabbits,” Arsac says. “It's very difficult to take legal action against a rabbit farm. The general regulations on mistreatment of animals could apply, but these are really conditions of structural mistreatment. The animals' living conditions are the problem.”

The campaigners do not intend to single out this particular farm, whose owners refused to respond to French media requests for comment. L214 says the farm reflects conditions for rabbits across the country and that French people have shown they care about animal well-being.

“Condemning this farm would mean condemning a whole sector,” Arsac says. “We'd rather have a law that says raising livestock animals in cages does not conform to what's expected in terms of treatment of animals today.”

Unclear how Macron's majority will vote

On Thursday morning, the economic affairs commission of the National Assembly, France's lower house of parliament, opened the debate on a bill containing six proposals on animal rights. MPs are due to vote on the legislation next week.

Drafted by Yolaine de Courson and Cédric Villani, the bill aims to “ban certain practices that create suffering for animals”.

Aurore Bergé, who will represent the majority LREM in debating the proposals, said Wednesday the party was prepared to back some but not all proposals, without a clear line on those concerning intensive farming.

LREM support would make or break the bill, since the presidential party has the largest share of MPs and reaches majority consensus with a minimum support of other groupings.

Bergé told the French AFP news agency the party would support bans on mink farms and wild animals in circuses, in line with government announcements on Tuesday, but was against calls to forbid hunting.

“It serves nothing to create new animosities between rural communities and cities,” Bergé said.

L214 hopes the images of the rabbits will build support for proposals to put an end to cages on livestock farms by 2030 and require animals to have access to outdoor space by 2040, with a transition fund created for farmers to help them adapt their practices.

“The release of images of the rabbits is so that MPs can debate and vote on the proposals with a clear image in mind of the realities that animals face,” Arsac says. “If we've released these images, it's to show what intensive farming looks like.”

Akufo-Addo not bound to nominate recommended MMDCE hopefuls ...
41 minutes ago