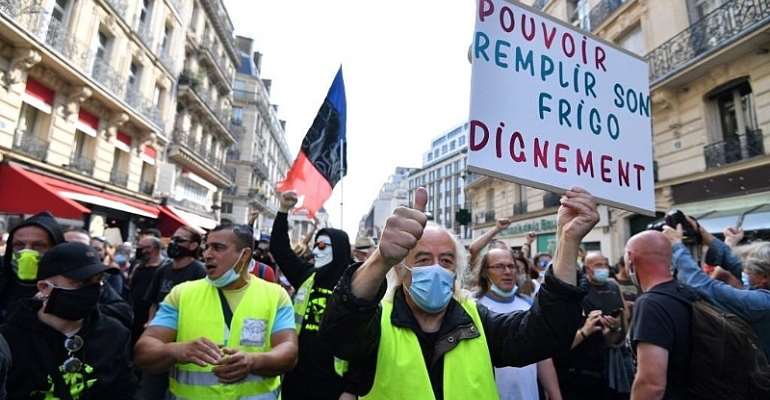 Amnesty International has expressed alarm that the right to protest in France is being increasingly hampered by the application of "draconian" laws. In a new report, the rights group says thousands of people were unfairly targeted at anti-government demonstrations in 2018 and 2019 – and that the situation had worsened under Covid-19 restrictions.

"Thousands of peaceful protesters have been swept up in France's draconian crackdown on demonstrations," Amnesty International said in a report released on Tuesday.

It documents "how a blanket ban on protests following the Covid-19 lockdown, was disproportionate and resulted in hundreds of unjustified fines."

"It also finds that long before the pandemic, first aiders, journalists and human rights observers were among those targeted under vague laws during nationwide protest movements that began in late 2018."

More than 40,000 people were convicted in France in 2018 and 2019 "on the basis of overly broad" laws including "contempt of public officials," "participation in a group with a view to committing violent acts" and "organising a protest without complying with notification requirements."

"A legislative arsenal has been deployed to arrest and prosecute protesters arbitrarily and to unduly restrict their right to freedom of peaceful assembly," the report said.

Some 11,200 Yellow Vest protesters were placed in pre-charge detention between November 2018 and July 2019.

"Violence during demonstrations is a legitimate concern, but there is a political desire to make examples of people and deter others from taking to the streets," Marco Perolini, a French researcher at Amnesty International, told AFP.

While it did not defend the actions of protesters who commit violence or arson, the rights group said many who were peaceful have been fined, arrested and prosecuted -- some for merely bringing protective goggles or masks to a protest.

The Amnesty report said French authorities had "weaponised criminal law," for example with "disproportionate restrictions on public assemblies" in the context of social distancing measures to curb the coronavirus epidemic.

It cited three cases in which 85 people were fined for participating in small protests in May and June this year, despite wearing face masks and/or maintaining a safe physical distance from others.

In April 2019, a blanket ban on face coverings at protests was introduced, punishable with fines of up to 15,000 euros and a prison sentence of up to one year.

Between April and October 2019, 210 people were detained in pre-charge detention under this ban. In 2019, 41 protesters were convicted for this offence.

"It is ironic that a country with such a long and proud tradition of collective action for social change is criminalizing protest in this way," concludes Marco Perolini.

"Three years after Emmanuel Macron made an election pledge to protect the right to peaceful assembly, peaceful protest faces an unprecedented attack."

The justice ministry told AFP it would comment only after reading the full 63-page report.

“I'll be a prime minister in Egypt” — Koku Anyidoho reacts t...
6 minutes ago