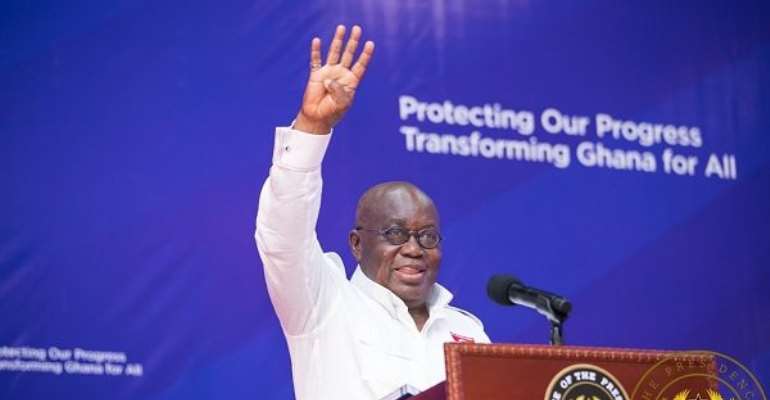 The President believes he has kept faith with the people of Ghana who gave him their mandate to lead the country and is hopeful of massive endorsement that would surpass the one he had in the 2016 polls.

“After four years in office, I am confident that I have delivered to the expectations of the majority of Ghanaians and I am certain of a landslide victory in December,” he stated.

He was speaking at a durbar held in his honour at Juaso in the Asante-Akim South Municipality as part of his three-day working visit to the Ashanti Region ahead of the 2020 general elections.

He was accompanied by some Ministers of State in including Mr. Mathew Opoku-Prempeh, Minister of Education, Mr. Alan Kyerematen, Minister for Trade and Industry, Mr. Kwasi Amoako Atta, Minister of Roads and Highways, and Mr. Simon Osei Mensah, the Ashanti Regional Minister.

President Akufo-Addo said he won the 2016 election on the back of the good policies he promised Ghanaians and the poor governance of the then Mahama administration.

He said his government had managed every sector of the economy better than the National Democratic Congress (NDC) and called on Ghanaians to renew his mandate to consolidate the gains over the last four years.

President Akufo-Addo appealed to the people of the three Asante-Akim areas to maintain their Members of Parliament (MPs) to support his next administration to implement pragmatic policies to improve the lives of the people.

The President urged the people not to deliver anything less than 95 percent of votes in the Municipality to ensure massive victory for the New Patriotic Party (NPP).

Mr. Kwasi Amoako Atta, the Roads, and Highways Minister said 12 out of 16 roads were currently under construction in the Municipality with the remaining four going through procurement processes.

He assured the people of speedy completion of the Juaso and Obogu Town Roads Projects after the chiefs complained of the slow progress of work.

President Akufo-Addo used his visit to commission a 12-unit classroom block at Juaso Senior High School and two factories at Asankare under the One District One Factory Programme.

—Files from GNA were used for this piece

‘We’ll go hungry if we stop light fishing’ – Fishermen in El...
9 minutes ago