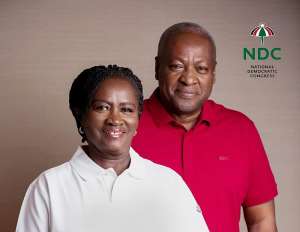 JDM and the NDC have put together a much more quality Election 2020 campaign than Nana Addo and the NPP. The NDC’s presidential primaries in which President Mahama was given an overwhelming endorsement, to the parliamentary primaries, to the choice of running mate, and finally to the manifesto launch have all been quality stuff. With the manifestos, independent and objective observers have judged the NDC’s as the more superior.

When President Mahama settled on Prof. Jane Naana Opoku-Agyemang as his running mate, the country was thrown into a state of great excitement and expectation, but churlishly, the NPP decided to downplay, and deride its significance. Positive public reaction shut them up!

The official campaign poster of John and Jane is so refreshingly optimistic and confident, unlike the jaded, tired image of Nana Addo and his running mate. In fact, the two of them look very old fashioned, devoid of any charisma, with an air of insincerity (from the lies of 2016) as they leer at the observer, while John and Jane ooze the vibrancy of a country waiting to be reborn. No wonder I have been reading so much confidence from NDC members, supporters and sympathisers who do not talk about “if” JDM forms the next administration early next year but “when”.

From that day in 2018, when Madam Charlotte Osei was bundled out of office as chairperson of the electoral commission on spurious grounds by Nana Akufo-Addo, the traps were being set simultaneously for the intended victim, i.e., the NDC, to be rigged out of Election 2020.

The NDC did not protest much, citing the death of Vice President Amissah-Arthur to remain calm. With that, Mr. Akufo-Addo felt encouraged to press home his advantage and appointed Jean Mensa of the Institute of Economic affairs as a replacement.

She did not waste time as she set about dismantling everything she met at the electoral commission, including even the modernistic logo bequeathed the commission by the Charlotte Osei administration.

She surpassed her own over-exuberance and in concert with other conspirators, by jumping to the tune of the incumbent and in so doing, embarked on one of the most reckless, irresponsible and destabilizing acts ever perpetrated by a public servant: the compromising of the electoral process to win the elections for the incumbent, even before a single vote has been cast on December 7.

The majority leader in parliament made it quite clear that with the new voter register Madan Mensa was proposing, there was no way the NDC could ever win an election in Ghana again. It rang loud and clear but somehow the non-NPP political establishment glossed over it. The man knew several things the rest of us were in the dark about – obviously. As we approach polling day only two months from now, we are all not sure. The odds are so stacked against Mahama and the NDC that, I have been wondering if there is any point at all…

A case in point: in addition to all the shenanigans already noted, challenged, and catalogued by stakeholders regarding the “new” voter register, the electoral commission, in a bizarre and brazen move is re-opening the register tomorrow, Thursday, October 1 2020, ostensibly for people who have since attained the voting age and others who for whatever reason could not register before the exercise ended – two months to Election Day. That would be a field day for them to pad the register some more…

Tomorrow’s voter registration is a very curious, highly suspicious, and questionable activity. Why would they do such a thing? On the surface, it may seem reasonable, but the reality is that it offers the commission an opportunity yet again to fiddle with the figures and cook the already questionable register. Any additions to the register from today’s exercise constitutes a material change to what has been publicly exhibited; what comes out of today’s exercise, must perforce also be opened for examination as with the additions, it would be a new register altogether. Today’s exercise cannot be benign; it reeks of an attempt at daylight electoral robbery.

I do not know what the NDC would make of it, but it is with a fundamentally flawed register that the party would be following the NPP into the elections. There are a few options available to the NDC to adopt, which I cannot disclose here, but I have been taking consolation from the fact that good always triumphs over evil. With all the traps laid, the good conscience of the land will eventually override the rigging juggernaut now on the march.