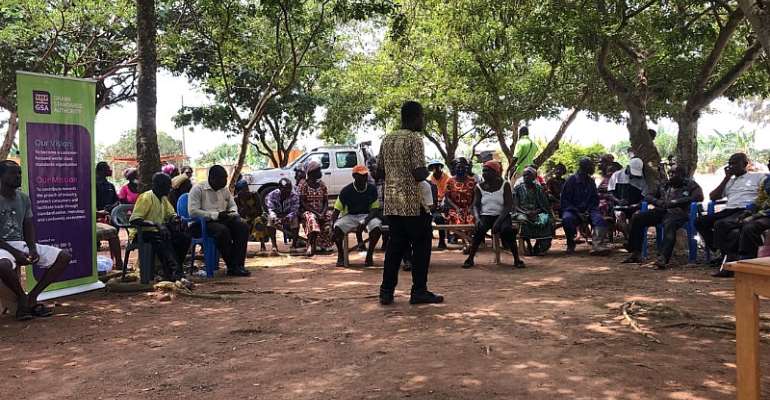 The Ghana Standards Authority (GSA), with support from the Alliance for a Green Revolution in Africa (AGRA), has embarked on a National Aflatoxin Sensitisation and Management (NASAM) project in the Ashanti on Region to educate Agricultural actors in the grain value chain and the general public on standards requirements and the dangers and management of aflatoxins in grains.

The sensitization programs held in three various districts of the Ashanti Region brought together over 300 players in the grain value chain.

Forty Agric Extension Officers in Kumasi, the Regional capital, were trained on the dangers associated with aflatoxin contamination in grains and management methods to reduce these contaminations.

They were then tasked to take the information to their farmers to educate them on Aflatoxins.

During the training, Mr. George Kojo Anti, Business Development Manager at the GSA expressed worry about the Aflatoxin menace and encouraged the extension officers to educate the farmers on the management of these Mycotoxins.

"Adhering to these good farming practices will not only help you produce grains free from aflatoxins but will also allow you to get premium prices on produce sold," he added.

He also pointed out that Aflatoxins are not only causing harm to consumers but they are affecting our economic growth as a country due to the continuous rejection of our grains by the European Union (EU).

Farmers, traders, and Agric officers in Ejisu, Bosomtwe, and Kwabere, all in the Ashanti Region, were then trained on the methods of reducing aflatoxins in grains, mainly, maize, groundnuts, sorghum, Agushie, and rice.

They were taken through various ways aflatoxins contaminates grains and teaching practices that could help reduce the menace.

The aim of the project is to catalyze and sustain an inclusive agricultural transformation by improving food safety and security through increased knowledge about aflatoxins, its impact, and management.

Finally, the project 'train' ended up at the Ashanti Region which was the last of the regions to be covered in order for the sensitization to be widespread throughout the whole country.

The project has directly impacted over 10,000 actors, including farmers in the grain value chain throughout the whole country over the two year period of the project.