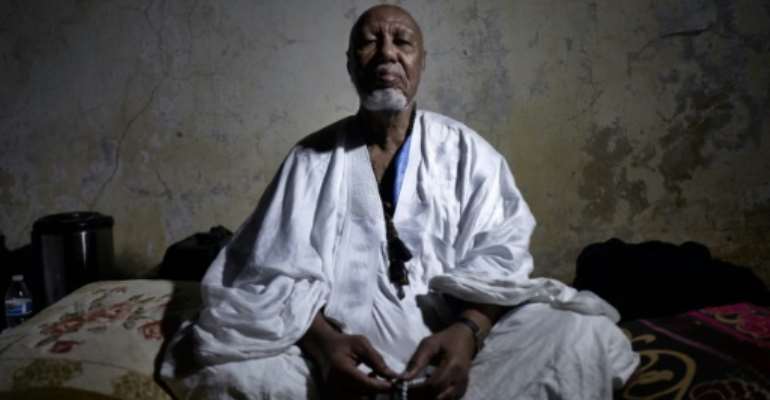 Cattle herders, traders and heads of state are among the people who have sought the ear of the sharif of Nioro, one of Mali's most influential men, to whom they voice their needs, grievances and hopes.

A man of great clout and reputed wealth, Mouhamedou Ould Cheikh Hamahoullah derives his status from his reputation as a holy man, a proclaimed descendant of the Prophet Mohammed.

The 82-year-old figure, universally known as Bouye, responds with advice, adjudicates in disputes or offers support.

Bouye heads a branch of West African Sufism founded by his father Sheikh Ahmedou Hamahoullah at the start of the 20th century.

He very rarely leaves Nioro du Sahel, his birthplace near the Mauritanian border, where as sharif, or leader, he is responsible for protecting the community.

But he has no need to travel, for people come to see him in an endless stream, "on foot, riding donkeys, camels and horses across the Mauritanian desert," he says.

The branch of the Tijaniya Brotherhood conceived in Nioro by his father has between five and 10 million disciples -- there is no accurate count -- reaching as far afield as Senegal and Ivory Coast.

The sharif describes how the new-born brotherhood alarmed the French colonial power, which twice deported his father for long spells and killed "two of my big brothers aged 28 and 24, while the third was jailed."

People come to see the sharif at his centre from all over the region. By MICHELE CATTANI (AFP/File)

This evening, the sharif is seated among followers in the courtyard of his zawiya -- or Sufi religious centre -- in the shade of a grand old tree with prayer mats at its feet.

The air is hot but nobody moves, for all are drinking in every word of their charismatic leader.

"I'm probably the most popular man in Mali, that's true, but it isn't nice to talk about oneself," Bouye declared before embarking on an interview with foreign journalists, his first in more than 10 years.

According to researcher Aboubacar Haidara, Bouye's influence is enormous. It includes the funding of several presidential election campaigns in Mali and neighbouring Mauritania and shaping Malian governments from the zawiya.

But the sharif, with his shaven head, white beard and long black scarf wrapped loosely around his neck, downplays any such talk.

After growing up in a rural family and receiving a Koranic education, Bouye defends himself from claims of meddling in politics.

"As long as I'm not asked, I don't intervene. I have supported, it's true, many political figures, but it was they who came to ask for my help," he says.

Young adherents to the order repeat religious verses at the centre. By MICHELE CATTANI (AFP/File)

"Imams and religious leaders have a part to play to see that the country is on the right track," he maintains.

Bouye flew to Bamako on Monday aboard a private Moroccan plane to meet delegates from King Mohammed VI.

His exceptional trip came a day after transitional prime minister Moctar Ouane was appointed to form a new government.

Bouye figures among the handful of powerful people whose help is solicited for resolving Mali's many problems, which range from deep poverty and ethnic rifts to jihadist violence.

But he is the only one who can draw decision-makers from the capital Bamako 500 kilometres (300 miles) away.

Anthropologist Hamidou Magassa, a specialist in Muslim movements of West Africa, gives Nioro the ironic epithet of being "a bit like the Vatican of Mali."

The latest to come were soldiers who overthrew President Ibrahim Boubacar Keita on August 18.

"They are my sons," Bouye said, prayer beads in his hand. "There is no reason not to trust them."

The military should stay in power, he argued, because civilian governments have been so disappointing.

Nonetheless, Bouye long backed Kieta, who was the first politician he funded openly during the election of 2013.

The sharif contributed some 700 million CFA francs ($1.25 million / one million euros) to Keita's campaign, according to his followers.

He also mobilised his own supporters in a network that includes many people in politics and business.

Keita was elected with 77 percent of the vote but proved to be "incapable and incompetent," Bouye said.

Bouye's detractors accuse him of taking over the local economy, with a hand in sectors ranging from fuel to food supplies, and of enjoying favourable customs duties. Stickers with the sharif's face are on every goods vehicle in the region.

Nioro du Sahel is located near the Mauritanian border. By MICHELE CATTANI (AFP/File)

The sharif denied having any such favours, but acknowledged setting up an import-export business after former president Amadou Toumani Toure granted his approval.

The trade "benefits the population" and is not for personal enrichment, he said.

As often happens, the interview ran far into the night. The sharif's doctor, who is director of Mali's largest hospital, has told him to take it easy and go to bed at 10pm, but aides said he rarely retires before midnight.

Sometimes the visitors include African diplomats, but no envoy from the West has come in the past decade, he said.

Bouye mostly receives ordinary people from his vast zone of influence, as is customary for a traditional chief in West Africa.

"The sharif's contribution to the stability of the region can't be overestimated," one of his followers said.

He described how, a few days earlier, jihadists moved in to preach in a village not far from Nioro. The first authority to whom the villagers reported the event was no state official but Bouye.