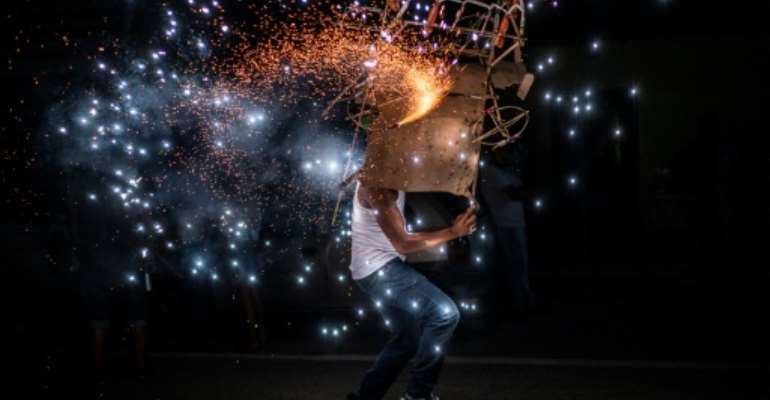 Members of the Afro-Mexican community of Cuajinicuilapa celebrate their roots with an annual festival in honor of their patron saint Nicolas of Tolentino. By PEDRO PARDO (AFP)

With dancing devils, fireworks and traditional musical instruments like the donkey jawbone, Afro-Mexicans proudly celebrate a heritage that is often forgotten in the Latin American country despite a centuries-old presence.

The festival in honor of their patron saint Nicolas of Tolentino is part of efforts by the community of Cuajinicuilapa in southern Guerrero state to stop their culture and identity dying out.

Around 1.5 million of Mexico's 128 million people are of African ancestry, but they are largely invisible outside of a stretch of Pacific coast known as the Costa Chica.

These descendants of slaves are hard to find in the country's history books and sometimes mistaken in their own country for immigrants from Cuba, Haiti or Belize.

Around 1.5 million Mexicans are of African descent. By PEDRO PARDO (AFP)

"We're proudly Afro-Mexican," says 28-year-old dancer Ady Cruz, her twists and turns illuminated by fireworks stuffed into a traditional cane frame that she swings through the air, leaving a trail of sparks.

The air is filled with the smell of fireworks and pozole, the traditional Mexican stew.

Even the coronavirus pandemic, which has left more than 76,000 people dead in Mexico, does not deter this year's festival-goers.

"We do it from the heart and I hope no one gets infected," says Cruz.

Hugo Sandoval, a farmer who has been dancing for Saint Nicolas for 22 years, says people in the community are fed up with the virus.

"They're waiting for a party to celebrate."

Angelica Sorroa, 58, is the manager, guide and lone employee of a museum in Cuajinicuilapa dedicated to educating people about Afro-Mexican history and culture.

"We encourage children from an early age to accept their origin because there's still denial," she says.

Afro-Mexican traditions include the Dance of the Devils. By PEDRO PARDO (AFP)

"Who wants to be the descendants of slaves?"

Africans first arrived in Mexico with the Spanish conquistador Heenan Cortes in 1519.

A decade later slaves were shipped over to work on cocoa and cotton plantations as well as in livestock farming.

Members of the Afro-Mexican community perform the Dance of the Straw Bull. By PEDRO PARDO (AFP)

Around 250,000 Africans arrived over the course of several decades and spread across the country, according to historians.

By the 18th century, many had already won their freedom and took up jobs such as foremen, muleteers, fishermen and cowboys.

Although in other areas they mixed with indigenous people, after Mexico won independence Cuajinicuilapa was largely cut off, helping to preserve its identity.

"The highway came here very late and that meant that there was no mixing and black people lived in isolation," says teacher and musician Jorge Anorve.

'Dance of the Devils'

The September celebration in honor of Saint Nicolas is considered the feast of "the poor", and Afro-Mexicans remain a disadvantaged community.

Only 15 percent of them earn more than three times the minimum wage, compared with 30 percent of the rest of Mexicans, according to official figures.

Around 15 percent are illiterate, against the national average of 5.5 percent.

Mexicans of African descent have faced "internalized racism" for generations, says Mijane Jimenez, the 31-year-old founder of the National Network of Afro-Mexican Youth.

Afro-Mexican identify is not just about physical appearance.

Jimenez considers herself Afro-Mexican for having "been born, danced, given birth and eaten" alongside other people in the community.

Jose Pacheco, a 39-year-old teacher, has devoted a large part of his life to preserving traditions such as the Dance of the Devils, which commemorates dead ancestors.

For 18 years he has taught children the ritual, which was originally dedicated to an African god but is today part of Catholic festivals.

"Black people set the rhythm in this country," though you won't read it in the history books, he says.