To Dagbon with love 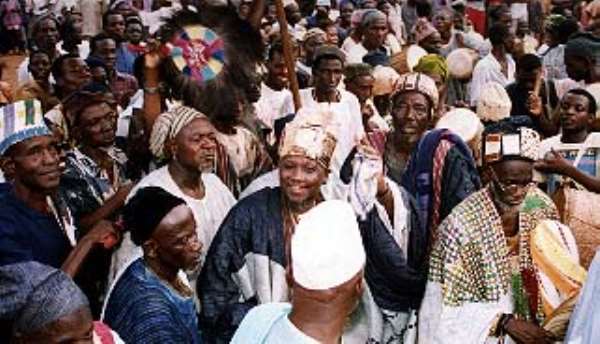 The Minister for Foreign Affairs, Nana Akufo-Addo has urged the people of Dagbon to unite behind Government and their traditional leaders to ensure lasting peace.

Nana Akufo-Addo made this call when he paid a courtesy call on the regent of the late Ya-Na Yakubu Andani, Kampakoyana at the temporary palace in Yendi over the week-end.

Nana Akufo-Addo was in Yendi as part of the last leg of his pre-campaign tour of the Northern Region.

"I don't believe that any groups of people have a genetic predisposition for violence. Often times people resort to violence to address their grievances based on feelings of injustice or marginalisation which may be real or imagined”, he said.

He however assured the regent of government"s avowed commitment to the peace process and called for restraint.

Nana Akufo-Addo told Kampakoyana “Your father was a very good friend of mine and I am deeply pained that today he is not around on the occasion of my twentieth visit to Yendi.

“At the same time it brings me joy to see you, a virtual photocopy of him sitting in his place. I want to assure you of my friendship as well and to ask you to return my friendship, so that together we can build on the legacies of your father.”

Kampakoyana expressed his pleasure at the Foreign Minister's visit and assured him of his willingness to contribute to lasting peace in Dagbon.

Kampakoyana gave the Foreign Minister the traditional cola nut to signify his acceptance of the minister's gesture of friendship.

Giving him and his delegation boxes of yams, the regent said, “if you were to sleep over in Yendi, I will have my household prepare you a sumptuous dish, but since you must be on your way, I present these yams to you, so it can help take care of your delegation.”

The Foreign Minister also visited the regent of the late Ya-Na, Mahamadu Abdulai, the Bolin-lana where he conveyed to him a similar message.

Responding on behalf of the Bolin-lana, Mbadugu urged Government to expedite the road map to peace in order to ensure a fitting funeral for the late Ya-Na Mahamadu Abdulai which he said is a major sticking point in the search for lasting peace.

The Foreign Minister and his delegation which included the former National Youth Organiser of the NPP and his spokesperson, Mustapha Hamid, Amadu Kaleem “Bizness”, Victor Newman the Chief Patron of FONAA and Catherine Tedam later addressed the Yendi constituency executive where he asked for their support in his bid to lead the party to victory in 2008.

In his address, he commended the executives of the party in Yendi for continually winning the seat for the NPP despite the seeming minority status of the NPP in the Northern Region.

He however called on them to lend a hand to neighboring constituencies like Mion and Bimbilla so that as he put it, “we can increase our over all gains in the Northern Region.”

He told his listeners, “I want you to make me the striker for our party in 2008, so I can score the winning goal,” with reference to the fact that both the NPP and the NDC have won two elections apiece since the inception of the fourth republic.

At Chereponi, what was intended as a private meeting with party executives turned into a rally as the township besieged the meeting grounds, demanding that Nana address them all.

The Minister and his entourage later paid a courtesy call on the chief of Chereponi Abukari Minkaila. The chief used the occasion to appeal to Government for a separate district from Saboba.

“Saboba is not just removed from Chereponi by distance, but we and the people of Saboba are different people with different languages and cultures.

“They are Konkomba and we are Chokosis which is an ethnic group of Akan origins. But for our love for peace it would have been difficult to co-exist,” he said.

Nana Akufo-Addo thanked the chief for maintaining the peace and said there are processes for creating districts and each demand will be looked at on its merit.

Nana Akufo-Addo is currently on a tour of all two hundred and thirty constituencies in Ghana, to consult with party executives on his candidature and to assess party structures.

So far his tour has taken him to all forty-five constituencies in the three Northern Regions.