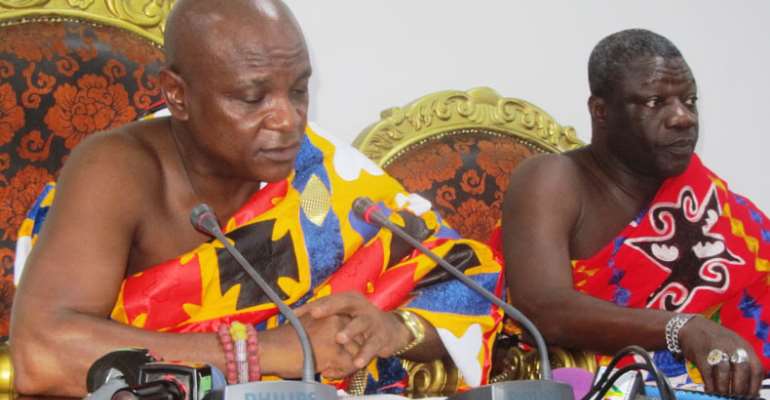 The Chiefs of the Asogli State say they are ever ready to deploy their traditional warriors to assist the state security to deal with the criminals parading as separatists who are working at destabilising the region.

Togbe Adzie Lakle Howusu, War Lord of Asogli Traditional Area who spoke on behalf of the Agbogbomefia of Asogli, Togbe Afede noted that the Chief and people of Asogli do not in any way support the criminal acts of persons parading as separatists.

To this end the Asogli State is ready to support the government and other security agencies to thwart the operations of the separatists especially within the Asogli area in the Ho municipality of the Volta Region.

These comments come less than 24 hours after two buses were set ablaze at the STC bus Terminal in Ho by criminals referring to themselves as separatists calling for the secession of parts of Volta Region to create Western Togoland State.

One of the buses was burnt to ashes while the other was partially destroyed by the fire.

Prior to this the criminals had attacked two Police stations, freed inmates, stole weapons, attacked the North Tongu District Assembly, seized and abandoned two vehicles and blocked major entry points to and from the Volta Region.

Some 35 persons have so far been arrested with 31 of them remanded into the custody of the BNI to assist with investigations.

Reacting to the developments of the separatist groups, the War Lord of Asogli noted that the acts are unlawful and unacceptable hence the Asogli Chiefs, Queens and people dissociate themselves from the group.

They also urged the people of the state not to associate with the group and assist the Traditional Council and security agencies to apprehend such elements in the area. They also called for a thorough investigation by the government to apprehend the perpetrators.

Togbe Howusu also appealed for heightened security in the Ho Municipality and the entire region as the safety and security of all citizens is very paramount.