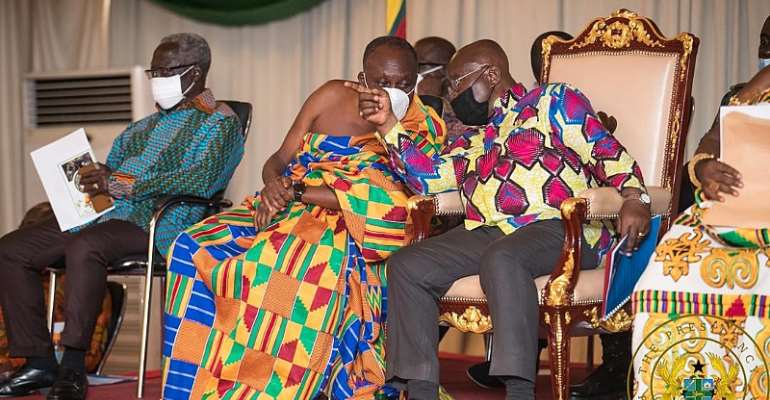 President Akufo-Addo has inaugurated the Tree Crops Development Authority, whose focus will be on the development of tree crops and the consequential benefits to be accrued to the country.

Inaugurating the Authority on Tuesday, 29th September 2020, at the Golden Bean Hotel in Kumasi, President Akufo-Addo explained that Government's strategy is to promote the development of tree crops, other than cocoa, with equal or even higher economic potential.

“The Tree Crops Development Authority, which is the legal and institutional outcome of PERD, will lead the agenda for the diversification of Ghana’s agriculture by developing the tree crops sector,” he said.

With its headquarters, here, in Kumasi, the Authority will operate like COCOBOD, and put in place policies and programmes to guide research, production, pricing and marketing of the six tree crops.

He told the gathering that if the economic potential of the six selected tree crops are properly harnessed, Ghana could soon increase exponentially her agricultural export earnings.

Thus far, 220,257 farmers have enrolled onto the PERD programme, whilst 235,850 hectares of land have been cultivated, with a total of thirty million seedlings of the various crops produced and to be distributed to farmers and interested persons.

“At full implementation, the PERD programme will link agriculture to industry through the provision of a solid raw material base for industrialisation, develop our rural economies, and assist in the structural transformation of the national economy. All these will propel growth, create employment, particularly for the youth, and the creation of wealth,” the President added.

The 29-member Board of Directors of the Authority is chaired by Stephen Sekyere-Abankwa, with a very proactive management team consisting of Chief Executive, William Quaitoo, and his two Deputies, Yaw Osei Oteng, in charge of Finance and Administration, and Foster Boateng, in charge of Operations.

President Akufo-Addo assured the Members of the Authority of the systematic efforts being made by Government to secure funding for the upgrading of the relevant research institutions to assist in the effective development of the sector.

The President was confident that, in the fullness of time, Government's approach will be wholly vindicated when all these initiatives are vigorously implemented.

“The over-arching vision of a Ghana Beyond Aid is neither rhetoric nor gimmickry. We are determined, through action, to achieve this vision, and today's programme is a clear indication of our total commitment. With God on our side, we shall surely succeed,” he added.