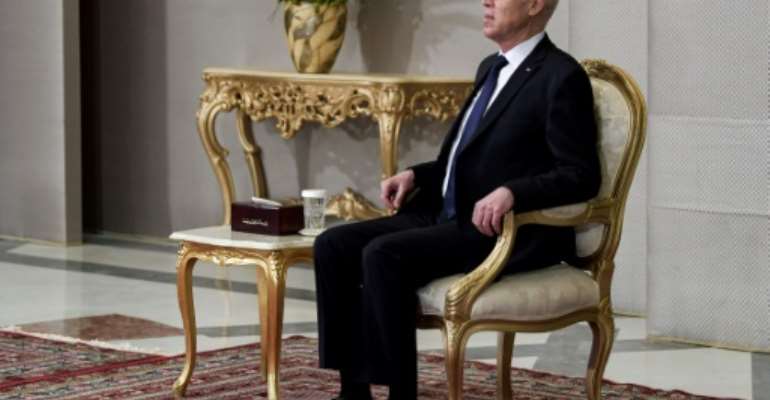 "Each society has its choices, we have our principles, and the text is there," Saied said. By FETHI BELAID (AFP)

"Anyone who kills a person for no reason deserves the death penalty," Saied told the nation's security council late Monday, according to a video posted by the presidency.

Tunisia carried out its last execution in 1991, according to Amnesty International, but death by hanging remains on the statue books of the North African nation.

Convicts have regularly been handed death sentences in recent years -- mainly in trials related to national security -- but a moratorium on carrying out the punishment has been in place.

Around a hundred people are currently on death row, according to anti-torture rights activists.

"Each society has its choices, we have our principles, and the text is there," Saied added.

A recent murder revived the debate on the death penalty.

The body of a 29-year-old woman, who had vanished after leaving work, was discovered last week dumped in a ditch near a highway that runs from the capital Tunis to the suburb of Marsa.

A man was swiftly arrested and confessed to strangling her and stealing her phone, according to the interior ministry.

The victim's father has demanded that her killer be executed.

The justice ministry said that the suspect had been accused in an earlier murder case that was dismissed, without giving further details.

"If it is proven that he has killed one or more people, I don't think the solution is... not to apply the death penalty," Saied added.

Tunisia had recently told the UN Human Rights Committee it would launch a debate on the possible abolition of the death penalty.

"The remarks made by Kais Saied are very worrying," said Chokri Latif, head of the Tunisian Coalition against the Death Penalty. "They open the door to barbarism."

Amnesty International said the president's comments were "shocking" and that resuming executions would be "a slap in the face of all the human rights progress" Tunisia had made.

"There is no credible evidence to show that the death penalty deters crime more effectively than a prison term following a fair trial," Amnesty's deputy regional director for the Middle East and North Africa, Amna Guellali, said in a statement.

Latif criticised what he called a "populist position on such a delicate question".

The activist expressed concern that the president was drawing on Islamic law rather than the constitution, which could set a precedent to "justify many further setbacks in the area of rights".

Tunisia has executed some 135 people since independence in 1956, the majority for political reasons, Latif said.