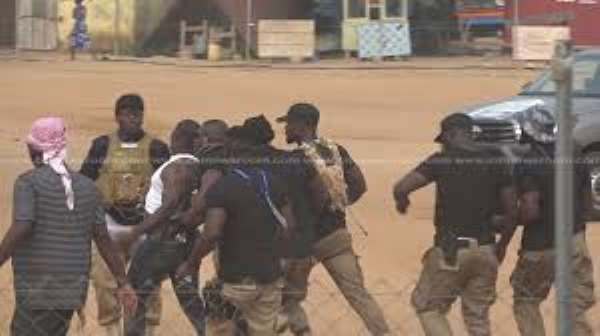 The Community Focus Foundation Ghana (CFF-GH) and Foundation for Security and Development in Africa (FOSDA) has charged the government, political parties, as well as all stakeholders to declare a zero-tolerance for electoral violence ahead of the December 7 polls.

With a history of violence caused by vigilante groups belonging to the two major political parties in the country during elections, the two groups have at a press conference in Accra today hammered on the need for government to put in place measures to achieve peace during and after this year’s election.

At the joint press conference by CFF-Ghana and FOSDA at the GNAT Conference Hall in Ho, Volta Region, the government has been charged to show leadership to ensuring that the anti-vigilantism law is applied irrespective of the offender’s status or political coloration to serve the purpose for which it was passed.

“…Political parties must allow state security apparatus to undertake their mandated duties without influence. Political parties should not incite their supporters to be violent but rather support the state institutions to do their work and channel complains and grievances to the appropriate quarters for redress”, part of the speech read at the press conference today reads.

Meanwhile, CFF-Ghana and FOSDA have urged the youth in the country to avoid being used by the political parties as tools to carry out violent acts in the events leading to the December 7 polls, during, and after.

“We call the young people of this country to resist any form of temptation to be used as tools to perpetuate any act of electoral violence before during and after the elections. On the other hand, government must invest in reducing the unemployment situation among the youth”, the speech concludes.

Read the full speech below:
Tuesday, 29th September, 2020
JOINT PRESS CONFERENCE BY COMMUNITY FOCUS FOUNDATION GHANA (CFF-GH) AND FOUNDATION FOR SECURITY AND DEVELOPMENT IN AFRICA (FOSDA) ON ADOPTING A ZERO TOLERANCE TO ELECTION VIOLENCE CAMPAIGN AND ENDING THE MANNERS OF POLITICAL VIGILANTISM BEFORE, DURING AND AFTER THE 2020 ELECTIONS HELD ON TUESDAY, 29TH SEPTEMBER, 2020 AT THE GNAT CONFERENCE HALL IN HO, VOLTA REGION.

Friends of the Media, Distinguished Stakeholders including Political Players, Traditional Authorities, Religious Bodies, Peace Council, Civil Society Organizations (CSOs), Development Partners, Ladies and Gentlemen, Good morning. On behalf of the organizers, Community Focus Foundation Ghana (CFF-GH) and Foundation for Security and Development in Africa (FOSDA), we are pleased to welcome you to today's media engagement anchored on the theme: “Ending political vigilantism and adopting a zero tolerance to election violence campaign in Ghana; a strategic priority for sustained peace and security”.

Ladies and Gentlemen, as you may be aware, political vigilantism and electoral violence has indeed become a very chronic crump on Ghana’s security effort and a move that has been described by many as a two-edged sword which comes with some benefits as well as negative consequences but with its negatives largely outstripping the positives. In many developing democracies, including Ghana, vigilantism is commonly summarized as “taking the law into one’s own hands”, and a violent display of brute-force to protect the interest of a group that one belongs to (Rosenbaum and Sederberg, 1974, 2017). In other words, individuals as well as groups who feel there is lack of protection, justice, and safety from the proficient authorities of the state resort to such vigilante groups for the best of security.

Friends of the Media, Ladies and Gentlemen, the notoriety political vigilantism has gained in Ghana leaves much to worry about. Ghana, a progressive democratic state built under the principles of the rule of law, transparency and accountable governance is gradually being short-changed into a police state, rightly defined by Merriam Webster as “a political unit characterized by repressive governmental control of political, economic, and social life usually by an arbitrary exercise of power by police and especially secret police in place of regular operation of administrative and judicial organs of the government according to publicly known legal procedures”

Ladies and Gentlemen, we are all aware that political parties whether in government or in opposition form and use vigilante groups also known as militia who act on their behalf to perpetrate mayhem on persons or groups considered as opponents. The emergence of the dreaded militia groups established and supported by surrogates of the two major political parties (i.e.) ruling New Patriotic Party (NPP) and National Democratic Congress (NDC) cast a slur on Ghana’s democratic integrity in the comity of nations. This has been highlighted in various reports such as one put together by the Emil Short’s Commission of Inquiry, Institute for Security Studies as well as researchers.

These so called vigilantes engage in riots, violent protests and property destruction; they are known to target elections, intimidating voters or mounting roadblocks to prevent people they termed “outsiders” from voting as part of a well-calculated scheme to disfranchise people they consider opponents to their course. They (vigilantes) have also been known to harass, threaten, assault, and even assassinate opponents. These vigilante groups are often violent, they target opposition groups and public officials they see as hindrances to their electoral fortunes.

Ladies and gentle, a few reminders of the actions of some of these militia groups will help us situate the dangers we are warning Ghana about. We recall that not too long ago, immediately after the 2016 elections many incidents of violence were reported across the country. Vigilante groups affiliated to the ruling government which had just been voted into power went on vandalism spree, seizing state properties, harassing former government appointees through unlawful invasions and going on collision course with law enforcement agencies. We also remember the violent attack meted on the Judiciary by members of the Delta Force at a court in Kumasi and freed suspects in lawful custody is still fresh in the memories of all Ghanaians and Non-Ghanaians alike. The brutal assault on ASP Nanka Bruce at the presidency cannot be forgotten.

Ladies and gentlemen we must also remember that this same phenomenon of vigilantism ended the life of a young NDC activist by supposed members of the Hawks a Vigilante Group affiliated with the NDC at the Ashanti Regional Secretariat of the party on 18th February 2020, where the leadership of the party had gathered for a meeting was a replay of many other atrocities committed by this dreaded vigilante groups.

The brazen acts of violence visited on innocent Ghanaians in the Ayawaso West Wuogon byelection under the orders of the SWAT team commander, DSP Samuel Kojo Azugu is worth remembering. The troubling report from the explosive documentary by the renowned Ghanaian investigative journalist, Manasseh Azure which was aired on Joy News on Thursday, 7th March, 2019, and exposed Pro-New Patriotic Party (NPP) militia group named De-Eye which was operating at the then seat of government, the Osu Castle, and led by one Nana Wireko Addo (a.k.a Choman), a former bodyguard of the President of the Republic lays credence to our position on the state of insecurity in Ghana.

Ladies and Gentlemen, we are becoming increasingly worried that despite the passage of the Vigilantism Bill, and the signing of the “Peace Accord” by leadership of the political parties, there still exist evidence of growing political vigilantism in the country. Fast forward, it was evidently clear that during the recent voter registration exercise, violent activities of party hoodlums was on the increase. It is important to note that electorates in a number of constituencies including Banda in Bono, Ketu South in Volta, Ahafo Ano North & South in Ahafo, Sekyere Afram Plains in Ashanti, Nkwanta South, Akan, all in Oti, Asuogyaman, Atiwa East in Eastern, Upper Denkyira East and West, Assin North, Central and South, Awutu Senya East (the shooting incidence by the MP), Weija Gbawe (the intimidation and beating of EC officials at Heater Hill Top Gbawe Zero) Agona West and East all in the Central Region and many others across the nation were not spared the intimidation.

Truth be told, the killings, alleged harassments, brutalization of innocent Ghanaians by some military personnel and party thugs during the recent voter registration exercise and the alleged ethnocentric military invasion of certain constituencies has indeed confirmed the heightened state of insecurity in Ghana.

Friends of the Media, other critical questions which obviously need to be answered by all of us is; why have we gotten here? Can we not see the slippery slope we are riding on is selfdestructive? As key stakeholders, can we prioritize, take collective action to correct the wrongs through aggressive advocacy for the necessary reforms for sustained peace and security? To us, yes, that’s why we are here today.

We cannot have peaceful elections with the continuous of these political militia or vigilante groups. The more we harbour them they bolder they get and acts with sense of impunity. The peace and security of Ghana, a country touted as a beacon of democracy in Africa is continuously being threatened by partisan vigilantism, which rears its ugly head particularly during elections. We wish to use this platform to remind the political parties that the peace and stability of this country is bigger than their ideologies and personal ambitions. The good people of Ghana have chosen a system of governance and a system of electing their leaders, characterized by fair, free and open elections and the best we can do is to unconditionally contribute our quota to its sustained growth.

For the foregoing, we call on government and all stakeholders to declare a zero tolerance for electoral violence and put in place measures to achieve it. We also recommend the following as steps to ending vigilantism:

Thank you for coming.