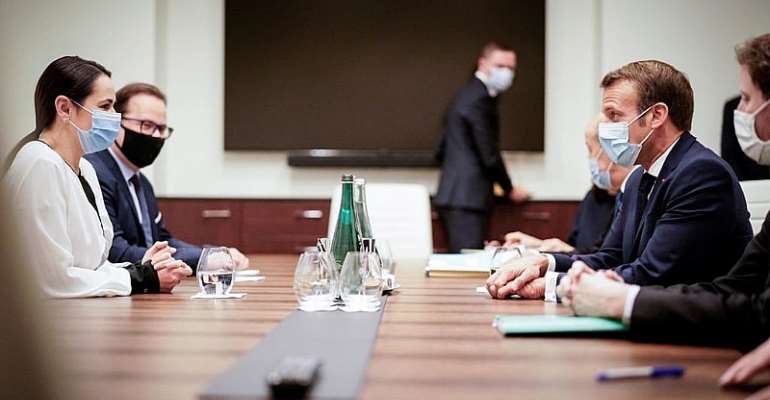 French President Emmanuel Macron on Tuesday promised to help with mediation in the political crisis in Belarus, as Russian leader Vladimir Putin lashed out at "unprecedented external pressure".

Macron spoke during a visit to Lithuania after a meeting with Belarusian opposition leader Svetlana Tikhanovskaya, a gesture that was seen as a major show of support for the activist.

“France supports the implementation of sanctions against those responsible for the post-election violence,” she told RFI's Denis Strelkov.

“Emmanuel Macron is convinced that the free and fair elections, which we are calling for, must be held in Belarus as soon as possible.

“Because, according to his words, there are too many people suffering."

Tikhanovskaya said that she thought Macron “is really concerned about the fate of our political prisoners and the victims of torture. His sincere feelings towards Belarus are very visible," she said, adding that “as a strong leader, he would obviously be essential to lead this mediation”.

Macron confirmed during a press conference that  “we will do our best as Europeans to help mediate and we will come back to OSCE mediation in order to progress," referring to an offer from the Organisation for Security and Cooperation in Europe (OSCE).

Macron told Russian leader Putin during a meeting in August that he was "very worried about the situation in Belarus and the violence that citizens have faced during the elections," but suggestions for dialogue never materialised.

Belarus has been in upheaval since an 9 August presidential election in which Tikhanovskaya claimed victory against the incumbent Alexander Lukashenko, who has ruled Belarus since 1994.

Tikhanovskaya fled to Lithuania in the aftermath of the vote as mass protests on the streets of the former Soviet republic were met with a crackdown in which thousands were arrested.

The European Union has refused to recognise the result of the election which gave Lukashenko 80 percent of the vote, and Macron on Sunday said that he "has to go".

EU leaders are preparing to adopt sanctions against Lukashenko and other top Belarusian officials at a summit later this week.

Macron has said that Putin, Lukashenko's main ally, is favourable to mediation by the OSCE in the Belarus crisis.

But Putin on Tuesday said in televised remarks that Belarus is in a "difficult situation" and is facing "unprecedented external pressure".

Addressing a forum on the Belarusian and Russian regions, the Kremlin chief said Moscow was ready to stand by Minsk, describing ties as "timeless and all-weather".

The Belarussian Belta News Agency reported that Putin promised to provide Lukashenko with security assistance if the political crisis worsens, as well as a €1.2 billion aid package.