Boost for vaccine doses planned for poor as virus rages on

By Nina LARSON and AFP bureaus 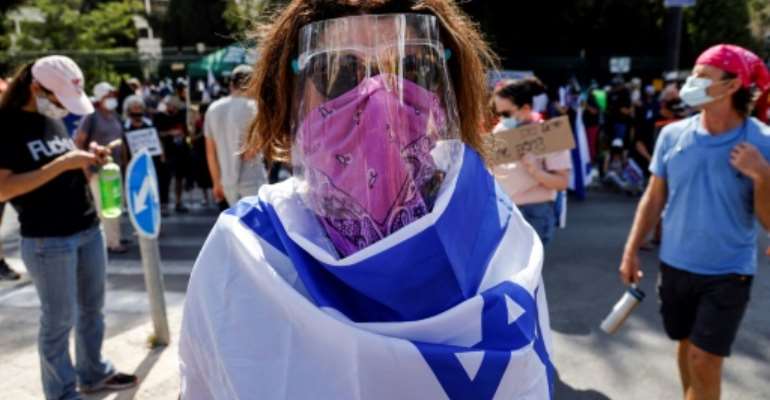 Israel has the world's highest infection rate per capita. By Menahem KAHANA (AFP)

Up to 100 million additional doses of any eventual Covid-19 vaccines will be secured for delivery to poorer countries in 2021, health groups announced Tuesday, as the virus showed no sign of receding after claiming more than one million lives around the world.

The announcement doubles the number of doses already secured from the Serum Institute of India by the Gavi vaccine alliance and the Bill & Melinda Gates Foundation, following an initial agreement last month.

The public-private health partnership stressed that the eventual total is "potentially several times" greater, and said the price would be capped at $3 per dose.

"No country, rich or poor, should be left at the back of the queue when it comes to Covid-19 vaccines; this collaboration brings us another step closer to achieving this goal," Gavi chief Seth Berkley said in a statement.

As nine vaccine candidates are in last-stage trials, the World Health Organization is stepping up efforts to provide faster and cheaper testing to poorer countries.

The WHO said Monday that some 120 million rapid tests for Covid-19 will be made available to low- and middle-income countries at $5 each under a $600 million scheme -- as long as funding can be secured.

The kits -- faster, cheaper and easier to administer than regular standard polymerase chain reaction (PCR) swab tests, but also less reliable -- will be rolled out across 133 countries in the next six months.

"This will enable the expansion of testing, particularly in hard-to-reach areas that do not have lab facilities or enough trained health workers to carry out PCR tests," WHO director-general Tedros Adhanom Ghebreyesus told a virtual press conference.

Experts have for months been calling for widespread adoption of this low-cost technology so that people can test themselves several times a week.

As the restrictions tighten, protests have erupted as businesses worry about their survival and individuals grow frustrated about their jobs. By JUSTIN TALLIS (AFP)

In the US, President Donald Trump said 150 million tests would be distributed that deliver results in 15 to 30 minutes.

Harvard epidemiologist Michael Mina said the testing drive "is terrific and is a great start".

But the amount being distributed by the US government was "simply not sufficient" and production should be multiplied ten- or 20-fold, he added

Meanwhile infection numbers are climbing rapidly in Europe whose governments are clamping down on movement in an attempt to curb the surge.

Paris, London, Madrid have all been forced to introduce controls to slow infections, and Northern Ireland authorities became the latest to tighten curbs, while the Czech Republic and Slovakia said they were preparing to declare a state of emergency.

A million Madrid residents are under partial lockdown, with the city and the surrounding region at the centre of Spain's second wave.

The national government on Monday warned the local authorities of drastic measures if the region failed to move decisively to slow the uncontrolled spread.

Meanwhile, in Greece the first cruise ship to sail to the country since its lockdown docked at the port of Piraeus after a dozen crew members were reported positive for the virus.

In Israel, which has the world's highest infection rate per capita, Health Minister Yuli Edelstein said Tuesday that there was "no way" the country's second nationwide coronavirus lockdown would be lifted after three weeks as originally planned.

WHO chief Ghebreyesus said that coronavirus could still be effectively contained with measures such as social distancing and handwashing.

Infections in India have surged past six million. By SAJJAD HUSSAIN (AFP/File)

"One million people have now been lost to Covid-19 and many more are suffering because of the pandemic," Tedros said in an article in the British online newspaper The Independent.

"This milestone is a difficult moment for the world but there are glimmers of hope that encourage us now and in the near future.

"No matter where a country is in an outbreak, it is never too late to turn things around."

Worldwide the virus has now infected more than 33 million people and killed over a million, according to an AFP tally compiled from official sources.

Mid-September saw a record rise in cases in most regions and the WHO has warned that virus deaths could even double to two million without more global collective action.

On Monday the number of cases in India surpassed six million, with the country on course to overtake the United States in the coming weeks as the nation with the most infections.

COVID-19: Ashanti Region records 783 cases in one week
11 minutes ago