I Won't Lie To Retain Power This Year – Akufo-Addo 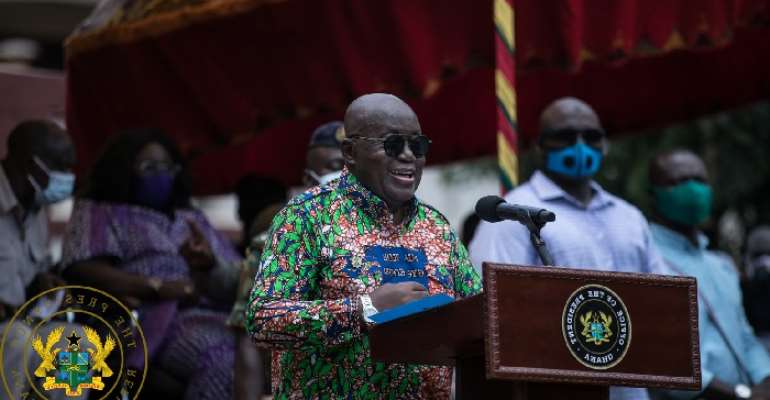 President Akufo-Addo insists he is trustworthy and credible and will never stoop low to peddle lies to win undeserved votes to cling on to power.

According to him, he is aware that some politicians have of late started spewing blatant lies and making false promises that they could not fulfil in a desperate attempt to win the upcoming presidential election.

But the President stated emphatically that telling 'big lies' to secure electoral victory is not part of his game plan, saying “I will not come out with concocted stories, sweet stories and lies to retain power this year.”

Addressing Otumfuo Osei Tutu II during a durbar of chiefs and people of Asanteman Traditional Council at the Manhyia Palace yesterday, the President said he was hopeful his positive track record would see him through the polls.

President Akufo-Addo, who sounded confident of victory in the forthcoming December 7 presidential election, announced that his government had successfully rolled out 1,824 projects across the country in the past four years.

“We have started 1,824 projects since we assumed the mantle of leadership and out of that colossal number, 774 of them are completed now and 1,050 are still under construction,” he announced.

He explained that the projects cut across all sectors notably roads, schools, health, works and housing, water and sanitation, among others, adding that his administration was doing everything possible to accelerate development.

“My track record in political office for the past four years is solid because every sector and region in the country has benefited from the positive and productive leadership I have exhibited,” he said confidently.

President Akufo-Addo said he still has a lot to offer in political office to help overcome poverty and spread wealth around for the people to benefit and urge the electorate to renew his mandate by voting hugely for the NPP.

He announced that they were starting the construction of the Boankra Inland Port project in the Ashanti Region in November to help provide employment for the energetic youth and create wealth.

The President said a whopping US$ 330 million had been secured already to kick-start the construction of the “Boankra Inland Port project, which has been in the drawing board for generations, this November.”

Highlighting more about the Boankra Inland Port project, he indicated that a Korean company and another one from Ghana would carry out that project, adding “and this is happening under my tenure.”

President Akufo-Addo said his government was also to build 111 hospitals across some selected districts in the country to bring healthcare delivery right to the doorstep of ordinary Ghanaians and save lives.

“Otumfuo, the outbreak of the deadly Covid-19 made my government aware that in fact the hospitals in the country are woefully inadequate and so have decided to construct the 111 hospitals in the 12 months to boost healthcare,” he said.

President Akufo-Addo stated that “Ghanaians should check my track record in political office in the past four years and cast their ballots on December 7,” adding that the response he was picking from all over the Ghana indicated that he had performed well.

“The warm reception and positive remarks from people in all the 16 regions I have visited clearly tell me that I have done well and that is why I have the confidence to avail myself to contest the presidency once again,” he said.

President Akufo-Addo, earlier in the day, visited the Unijay Factory under the One District One Factory (1D1F) project in the Asokwa Municipality to personally inspect how works on the big project were shaping up.

Straight from Unijay Factory, the President and his delegation of ministers of state also inspected works on the second-phase of the Kumasi International Airport project, which is set to be completed next year.