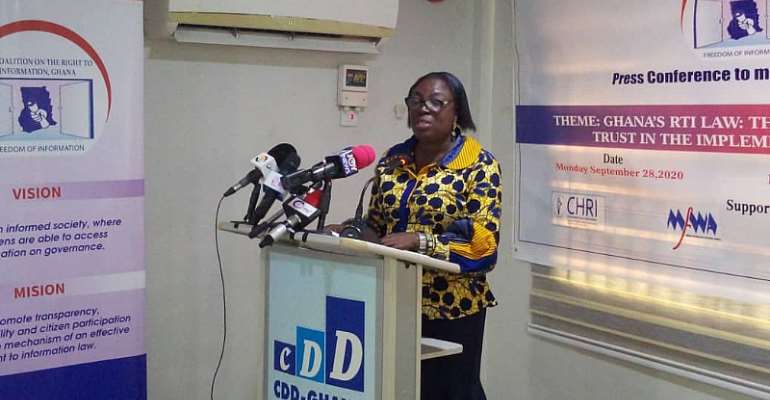 The Coalition on the Rights to Information Bill (CRTI) has expressed their disappointment to the failure of the government in implementing the RTI Act, 2019 (Act 989) over a year since it was passed into law.

The Parliament of Ghana on Tuesday, March 26, 2019, passed the Right to Information Bill into law before it was subsequently assented to by H.E Nana Addo Dankwa Akufo-Addo on May 21.

A month later, the Ministry of Information at a consultative meeting with several stakeholders including the RTI Coalition announced the implementation of a roadmap to allow the Act to come into full force at the start of 2020.

However, over a year later, there is no show in the implementation of the RTI Act with organizations refusing to give out information when needed.

An exercise commissioned by the RTI Coalition towards accessing information from 18 public institutions in Accra and Kumasi between June and August this year showed a dissatisfying 11% compliance.

Raising concerns about the delay in the implementation, vice-chair of the RTI Coalition Mina Mensah has bemoaned how the Ministry of Information has turned a blind eye to the group’s grievances.

“We also took advantage of this letter to the Ministry to request a copy of a report covering the status of the implementation of the RTI Act so far, and the record of funds, if any, that have been released for the implementation by the Ministry of Finance, considering the massive financial constraints that the Covid-19 pandemic has imposed on government resources.

“It is instructive to note that the Ministry of Information – which is the government agency assigned to lead this initial implementation process – has not responded to this request for information from us”, Mrs. Mina Mensah told journalists at a press conference organized by the RTI Coalition in collaboration with Commonwealth Human Rights Initiative (CHRI) with support from the Media Foundation for West Africa, CDD-Ghana, and Parliamentary Network Africa on the occasion of the Universal Access to Information (IDUAI) on Monday.

According to the Coalition’s vice-chair, the situation is “really disappointing especially taking into consideration how long it took for us to get the law and then secondly the fact that we had to wait a whole year for the implementation to start”.

Mina Mensah further lashed out at the National Democratic (NDC) and the New Patriotic Party (NPP) for failing to give attention to the RTI Act in their respective manifestos.

Meanwhile, the RTI coalition says they are presently working on a zero draft of a Legislative Instrument (LI) to the RTI which they hope would accelerate the process towards promulgating the subsidiary legislation to the current Act, as the envisaged under the provisions of the Act.

The Coalition says they will also continue with the request for information exercise to monitor institutions compliance with obligations under the Act. The exercise will culminate into a ‘hall of fame and shame’ activity where institutions that are complying with the RTI Act will be commended and those that are not will be called out.