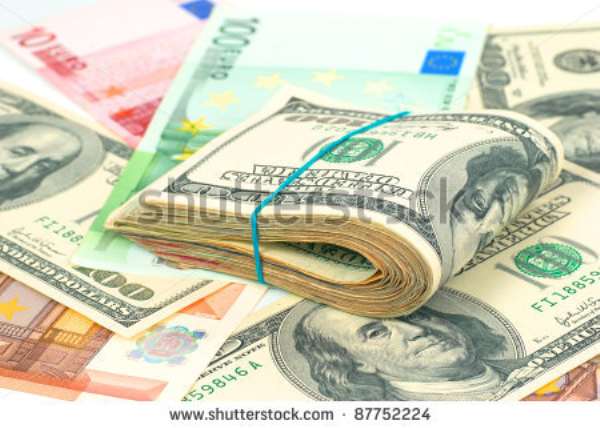 Loan owners usually encourage and push borrowers into more debts at a comparatively low teaser interest rate. On the premise that the richest countries are also the world's biggest debtors. After all, they tell us Africa's loans compared to GDP are still low until they push it beyond control.

They don't care to tell developing countries the consequences of borrowing without any idea of how to pay back. They tell Africans the high debts of the richest countries make them creditworthy for more loans.

What they don't say is that they also print their own money that are International tenders which can be rendered and acceptable anywhere in the world. It is not by accident, gold standard, sound economics but they made it so by political fiat. Indeed, these rich countries can print more money at home if their biggest buyers of Treasury Bills dare ask for payback or cash in.

Africans are the modern day arable farm workers and serfs that bought provisions on credits from the owners. Like those at the labor camp before them, they will never make enough money to pay off their foreign loans. It is a business and lifeline of your Colonial masters. What happened to Zimbabwe when they got tired of promises from the British of adequate compensation and had to reclaim their land? Which developing country or African Country do you know like Zimbabwe, could print currency that can be tendered outside in exchange for goods and services?

Even if an African Country could exchange its currency for the US dollar or Euro, one Euro or dollar would buy them a farm! No matter how long farm laborers worked on the farm, they always owed the owners for boarding and provisions they got from the owner's store (like the World Bank and IMF). It is not different from the provisions and toys African countries get from their Foreign Portfolio Investors and lenders. Despite their incomes, they always owed more than what they made in wages. Regardless of how many children and wives worked along with workers on the farm or labor camps. The same system that exploited the serfs in Europe and the slaves in labor camps, were justified as necessary evil during Slave Trade.

Despite Oil 0r Gold Incomes African countries will never make enough to pay back their British, American or Chinese loans. Foreigners make more money in Africa from experts' maintenance contracts, without sustainable endeavors or internal maintenance at home since they signed them away as conditions for the loans. Some of you may remember how system failure later found to be the main culprit in the Ethiopian Airlines crash, were blamed on African crew’s for the nose-dive until investigations exposed them as being aware of the problem and did not fix it.

Who are Africans going to call to deliver them from borrowing way over their heads for padded so-called development shadow projects? César Estrada Chávez was a USA labor leader, community organizer, businessman, and Latino American civil rights activist that dedicated his life work for better working conditions to farm workers. African countries have no César Estrada Chávez like the farm workers. What we had were Nkrumah as our Savior that saw through them; and British Lord Thomas McCauley (1835 letter) on how to capture India and Africa. But mis-educated Africans followed up on the prediction of McCauley to adhere and conquer Africa for generations.

The World Bank, International Monetary Fund and China now dictate how the Economy of African countries are run by the terms of the Agreement they signed before the loans are given. He who pays the piper determines the tune. It must be realized and well understood that in the history of Africa, no Foreign Power has helped any country in Africa to be less dependent on them. As soon as South Africa leadership changed from White to Black, nuclear technology was dismantled. When the French left Guinea, they spitefully dismantled existing facilities. In Nigeria where they thought the Steel industry at Ajaokuta, at any cost, would boost technological development, they could not find any Western country to help build one but Russia. The Russians, like Western countries, were not going to build a steel industry to compete with theirs. The Ajaokuta Steel Industry has remained in Coma since 1979.

Until recently, former French African colonies had their Foreign Reserves deposited in France like other African countries had done losing billions in interest and opportunity cost since the money could only be spent upon their colonial masters approval. An outright brazen theft worse or better than African looters who returned their loot to them, anyway.

Yet, after raping Africa of over a trillion in dollars or euro yearly, they congratulate themselves for their generosity in Foreign Aids of about 30b. In essence, using African countries as their ATM and thanking themselves for giving crumbs out of it as Aids. By some estimates lacking clandestine resource theft and padded costs: 30b put into Africa as aid but 192b taken out.

30b in overseas aid

21b in debt payment

46.3b in profits made by multinational corporations

17b in illegal logging

35.3b in tax evasion, tax havens and illicit financial flow

6b in health workers migration and exacerbate skills gaps

???b in the unaccountable drain

Indoctrination, reorientation and Miseducation by culture, religion and languages cannot be quantified in monetary terms.

Nevertheless, African countries think their economic salvation is still going to come from outside to leap forward into world technology. They fail to see obvious sabotage in Ghana in spite of being a Gold Coast, Gold Reserve remains outside and the whole Gold Standard ignored in preference for pretty printed papers turned into World currencies. Africans saw how Zimbabwe currency turned into toilet papers after continual Political agreements failed and farms were returned to original owners.

The only terms of Political Agreement acceptable to Foreign Powers is the one where they keep economic control. Nigeria gave Zimbabwe white farmers land, grants and concession to export, they did the same thing they did in Zimbabwe and South Africa denying the benefits to Africans.

The Chinese have joined the soft ground landing and they are now competing with Western countries in Foreign Aids, loans and grants. African countries are lining up to exchange their land grabs for "development". Loans, Foreign Aid and grants are teasers to control natural resources and labor of Africans in the labor camps. China has the control of Zambia lifeline. The China 2b deal with Ghana raised sustainability fear among Ghanaians. https://www.cnbc.com/2019/11/21/chinas-2-billion-ghana-deal-fears-over-debt-influence-environment.html In Nigeria 2020 budget, over N3 trillion or a quarter of the budget is dedicated to debt servicing. Every Nigerian from the over 200 million population owes the debtors N155,000 in debt. https://dailytrust.com/nigerias-debts-how-each-nigerian-owes-n155000

There is value to loans that increase your worth or wealth like a house you can pay off the mortgage or a tractor that increases your efficiency in construction and farming. You become debt-free and enjoy profit in later years by living free on the equity.