We’ll Name Promised Stadium After You – Berekum Queenmother To Mahama 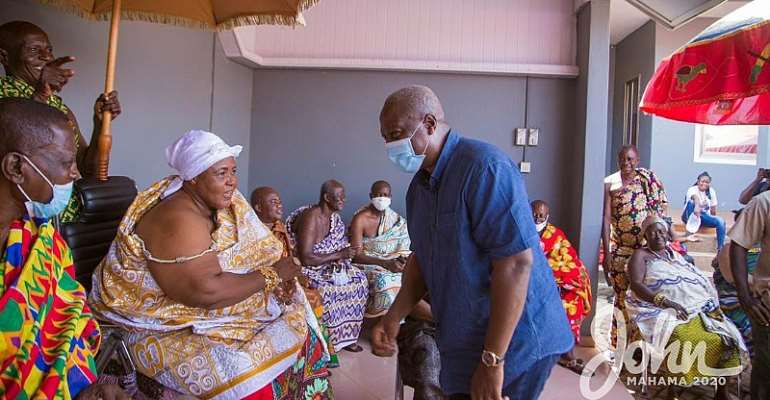 The Queenmother of the Berekum Traditional Area in the Bono Region, Nana Akosua Ameyaahene, has pledged to name a sports stadium, she expects former President John Dramani Mahama to build for them in case he wins the 2020 polls.

The Queen mother gave the promise on Monday, September 28, 2020 after the former President resumed his campaign tour of the Region on Monday.

John Mahama had earlier truncated his campaign tour of the region to address issues arising from the newly compiled voters’ register.

The Berekum Queenmother, in welcoming the former President and officials of the NDC, announced that she had already allocated a parcel of land for the stadium, explaining that sports, especially football, is a very important career path for the youth of Berekum.

“The game of football has some of its roots here in Berekum and it is a sport that is dear to the heart of my people,” she noted.

She also welcomed the announcement by Mr. Mahama to site a campus of the University of Energy and Natural Resources (UNER) in the region.

John Mahama used the opportunity to inform Nananom of some of NDC's programmes for Ghanaians ahead of the general elections.

He mentioned the inclusion of private schools in the Free SHS Programme, as well as scrapping of the double-track system as a few of the NDC’s programmes.

He also spoke about the extension of maternity leave to four months, the introduction of 7-day paternity leave and rolling out of a Free Primary Health Care Plan for all Ghanaians.

On specific projects for Berekum, John Mahama promised to build a district hospital and a cashew processing factory to be supervised by a Cashew Development Board to add value to the crop.