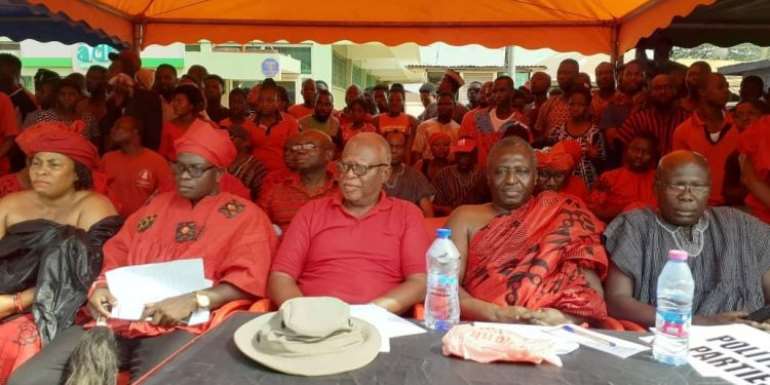 The chiefs, elders, and citizens of Gbi-Hohoe says they dissociate themselves from the activities of the secessionist group, Homeland Study Group Foundation.

The group has deployed several means to have Volta, Oti, parts of the Northern and Upper East Regions declared an independent country called Western Togoland.

“We the chiefs, elders and the entire citizenry of Gbi-Hohoe have followed with keen interest the activities of a secessionist group calling itself as 'Homeland Study Group Foundation' seeking to declare Volta Region and part of Ghana as Western Togoland, and wish to state equivocally that we, the people of Gbi-Hohoe dissociate ourselves from this group,” they noted in a press statement.

They said they do not condone the acts of illegality and vandalism being perpetrated by the group.

The chiefs added that the activities of the separatist group are becoming a threat to the people of the Volta Region and for that matter, Gbi-Hohoe following their Friday, September 25, dawn blockade of segments of the Juapong-Asikuma road and other roads in the region.

The statement also noted that Gbi-Hohoe has been part of the Volta Region from independence and their only allegiance is to the government and no other foreign power.

Chief of Gbi-Adansi and Spokesperson for Gbi Traditional Council, Togbe Adzimah V, advised the youth of Gbi-Hohoe to resist joining the group’s activities and instead report any strange personality found within the area.

They also warned the secessionist group to stay away from their community as they do not want to be a part of their activities and will fearlessly resist any attempts of invasion. Background

The Homeland Study Group Foundation (HSGF) led by 85-year-old Komi Kudzordzi, on November 16, 2019, declared independence for the imaginary country they called Western Togoland after a group meeting was held in Ho.

Some of the members were subsequently arrested in different parts of the country but were granted bail.

After they recently blocked roads leading into the Volta Region, about 31 members of the secessionist group were arrested and airlifted to Accra.

Thirty of them were arrested in Juapong in the Eastern Region and one other was arrested at Akuse in the Volta Region after their alleged involvement in the blockade of some entry points by road to the Volta Region.