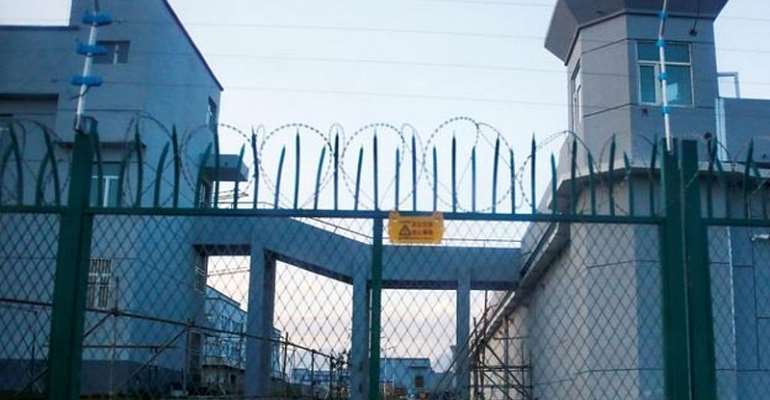 China has rejected claims that the authorities destroyed two thirds of the mosques in the predominantly Muslim Xinjiang Autonomous Region. Beijing also denies the existence of 380 camps allegedly used in a plan to force Muslim Uyghurs to abandon their language and beliefs.

But China admits to a massive “re-education” process aimed at “eliminating terrorism” in the region, and Communist Party Secretary Xi Jinping has lauded the policy as “successful”.

The report  called Cultural Erasured and published on 24 September by the Australian Strategic Policy Institue (ASPI) says that “approximately 16,000 mosques in Xinjiang or 65 percent of the total, have been destroyed or damaged as a result of government policies, mostly since 2017“.

Using satellite imagery, researchers found that “an estimated 8,500 mosques have been demolished outright, and, for the most part, the land on which those razed buildings once sat remains vacant.

“A further 30 percent of important Islamic sacred sites (shrines, cemeteries and pilgrimage routes, including many protected under Chinese law) have been demolished across Xinjiang, mostly since 2017, and an additional 28 percent have been damaged or altered in some way.”

Pure slander
China's pro-Beijing Global Times newspaper rejected the findings of ASPI as “pure slander,” adding that “Xinjiang has about 24,000 mosques, one for every 530 Muslims. The number of mosques in Xinjiang is 10 times more than that in the US.”

In another reaction to the report, China refused entry to “Australian anti-China scholar” Clive Hamilton, and ASPI analyst Alexander Joske, showing Beijing's “refusal to subject itself to such connivance of denigration under the guise of scholarly work”.

But the allegations are not new.
Reports of Beijing's growing efforts to “re-educate” large segments of its 15-million-strong Uyghur population started to circulate in 2017. Initially in the Chinese press itself, like the story published by the Xinjiang Daily, which talks about Uygur shop owner Ali, “who had a low level of education” and who was interned in the Hotian Education and Training Center because he “lacked sufficient vigilance against the harm of the 'three forces' - separatism, terrorism and religious extremism – that threaten China's unity."

These reports were followed by an increasing flood of reports by scholars and human rights organisations suggesting a quickly expanding conglomerate of detention centers aimed at forcing Uyghurs to learn Mandarin and discouraging them from engaging in religious activities.

'Healthy heart attitude'
At the beginning of 2018 The Guardian newspaper estimated the number of Uyghurs undergoing forced education at 120,000; in September that year, researcher Adrian Zenz collected evidence pointing at a numbers around 1,000,000 people in his groundbreaking study “'Thoroughly reforming them towards a healthy heart attitude': China's political re-education campaign in Xinjiang,” which attracted global media attention.

Subesequent publication in 2019 of Chinese internal policy documents and the Xinjiang Files, complemented with research by Human Rights Watch, which managed to reverse-engineer surveillance tools used by Xinjiang police, gave further support to the allegations.

Initially, China denied the reports, and an article in the state-sponsored Global Times simply admitted that “1.1 million (Xinjiang) citizens for start-ups, college students and those who had difficulty finding a job” would be provided with “special training”.

US gives a boost
China's drive to “re-educate” its Muslim Uyghur population may have been boosted indirectly by the United States.

Disturbances in Xinjiang go back to the 1980s. In 1996, the Central Committee's internal 'Document Number 7' identified Xinjiang as being the greatest problem for the Chinese Communist Party, and Beijing launched a “strike hard” campaign against Uyghur separatism.

The 9/11 terrorist attacks on the World Trade Centre in New York meant a windfall for China. The US “War on Terror,” inspired Beijing to initiate its own war against terrorism, concentrated in Xinjiang, merging that "battle" with the “Strike Hard” campaign against the Uyghurs, while claiming international legitimacy.

Terror lists
In 2003, Beijing placed four Muslim Uyghur organisations on its terror list. The US State Department had already listed one of them, the East Turkestan Islamic Movement (Etim) on the “Terrorist Exclusion List”, while a note by the UN Security Council said that the organisation was responsible for bomb attacks, robberies and setting up “bases outside China to train terrorists,” as well as dispatching “its members to China to plot and execute terrorist acts including bombing buses, cinemas, department stores,” resulting in 140 dead and 371 wounded between 2001 and 2009.

Subsequent incidents hardened Beijing's determination to crack down. The 2010 Aksu bombing (7 dead), knife attacks resulting in dozens of victims in 2012 in Yecheng and 2015 at the Kunming Railway station and other scattered incidents, along with anti-Chinese demonstrations culminating in mass riots in Xinjiang's capital Urumqi in 2009 (resulting in 197 dead), triggered a policy that seems to be aimed at rooting out any cultural and linguistic traits that are linked to Islam or Uygur traditions.

The current drive towards mass detention coincides with the rise to power of Xi Jinping in 2012. He visited the region in 2014, just after a deadly attack by Uyghurs who had driven cars into a crowd at a market place in Xinjiang's capital Urumqi, throwing explosives, killing 31 and wounding 90 in the process.

Turning point
It proved to be another turning point. According to leaked internal documents, Xi pledged “absolutely no mercy” and he had Chen Quanguo, party secretary in Tibet, who had been successful in suppressing dissent in Lhasa, transferred to Xinjiang.

Within two years, a system of electronic mass surveillance was put in place and the construction of the “re-education” camps accelerated.

“Offenders who have committed minor crimes under the influence of religious extremism will be educated, rehabilitated and protected through vocational training, through the learning of standard Chinese language and labor skills, and acquiring knowledge of the law,” according to a White Paper on “Terrorism and Extremism and Human Rights Protection” issued by China's State Council in March this year.

“These people are large in number,” the paper adds, without going into the statistics.

Communist Party Secretary Xi Jinping gave his final blessing during a meeting on ethnic affairs, saying that "facts have fully proved that China's work on ethnic affairs has been successful".

And while human rights groups say China's efforts – increasingly part of a nationwide policy that seems aimed subjugating other ethnicities such as Mongols and Tibetans as well – may lead to the extinction of minority cultures, Beijing says the policy pays off: “terrorism in Xinjiang has gradually been eliminated since these centers were set up,” according to the Global Times. “No more ordinary people are killed by rioters. The lives of those that already committed crimes as well as potential rioters have been saved.''