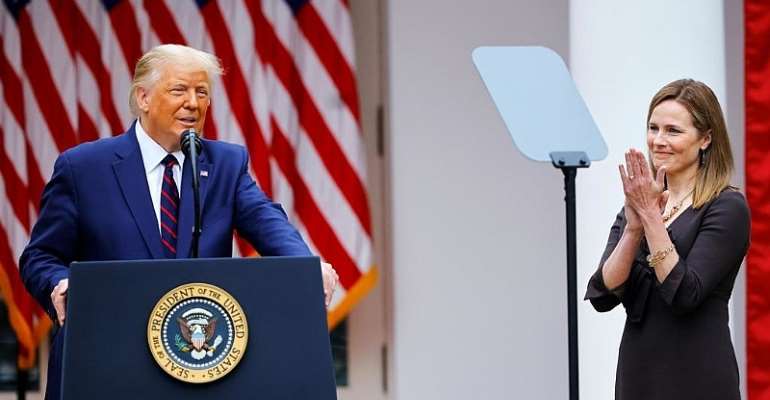 If Donald Trump's nomination of Amy Coney Barrett to the American Supreme Court is confirmed, she will be the sixth of the nine judges in the country's highest legal institution to profess allegiance to the Catholic Church, an organisation which represents less than one-fith of US citizens.

Barrett describes herself as a “faithful Catholic” but insists her religious beliefs do not “bear in the discharge of my duties as a judge”.

She is 48-years-old and the mother of seven children. If confirmed, she'll become the youngest of the nine-judge panel. Her nomination follows the death of the reforming feminist justice, Ruth Bader Ginsburg.

Liberal critics fear that Barrett's beliefs could undermine her ability to decide on issues such as abortion and contraception, thereby threatening fundamental values of religious liberty. Her legal career has included a stint as  clerk for the late conservative justice Antonin Scalia, who argued that there is no constitutional right to abortion.

In answering her White House questionnaire, Barrett admitted admiring Justice Elena Kagan, an Obama-appointed abortion rights supporter, for bringing “the knowledge and skill she acquired as an academic to the practical resolution of disputes”.

During her confirmation hearing, Democratic senator Dianne Feinstein said Barrett had “a long history of believing that your religious beliefs should prevail” and added: “The dogma lives loudly in you.”

Barrett says that her religious beliefs do not “bear in the discharge of my duties as a judge”. She has also said legal careers ought not to be seen as a means of gaining satisfaction, prestige or money, but rather “as a means to the end of serving God”.

To the right of right-wing Catholicism
The group to which Amy Coney Barrett belongs, People of Praise, has been around for about 50 years and is seen as conservative, even by Catholic standards. Women can not hold any position of importance within the organisation, and regard their husbands as their spiritual advisors.

Insiders suggest that the group's structure, where the male hierarchy hands down decisions to be followed by all 1,500 members, could leave Barrett in a difficult position in judging certain moral issues.

In 2012, when she was teaching at Notre Dame University, Barrett signed a letter attacking a provision of President Obama's healthcare reform that obliged insurance companies to offer coverage for contraception.

Especially since that court will, in November, have to decide on the fate of Barack Obama's healthcare legislation, including the provision of free contraception and safe, legal abortion to millions of poor women. At least 17 separate cases related to the legality of abortion are due to be heard by the US Supreme Court in coming months.

Interviewed by The Guardian newspaper, Emily Martin, vice-president for education and workplace justice at the US National Women's Law Center said, “we are really at risk of having a lot of the rights that we have long depended on become much more difficult to enforce in reality,” if Amy Coney Barrett's nomination is confirmed.