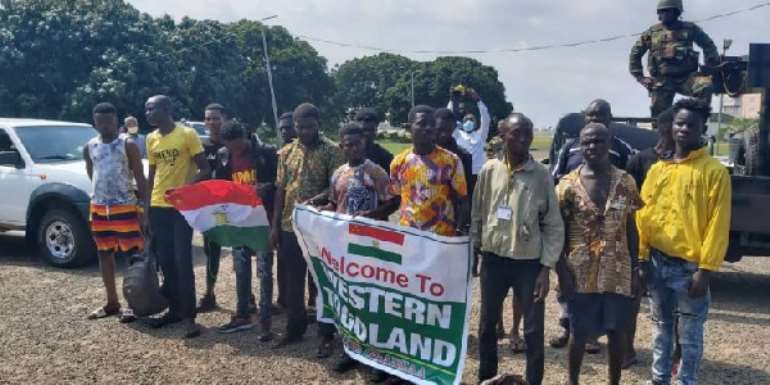 Conflicting accounts by top government officials, eyewitnesses, images and video footages emerging after the nation woke up to chilling news reports on attacks launched by armed men (insurgents) on Police posts, and road blockades aimed to cut-off and seize parts of the Volta region are pointing accusing fingers at government.

Contrary to early impressions that the insurgents, who declared their independence last Friday, September 25, 2020, were members of the separatist movement, Homeland Study Group Foundation, (HSGF) that has been campaigning for the secession of some parts of Ghana into an independent ’Western Togoland State’, it has now emerged that those involved in the latest insurgency attacks are members of a new group, Western Togoland Restoration Front (WTRF), whose activities are allegedly being funded by the Volta Regional Minister, Dr. Archibald Yao Letsa.

Again, video footages and pictures taken by witnesses have also revealed that their flag indeed is different. Some members speaking on Ho based Volta-1 TV, hours after the attacks also alleged that Dr. Archibald Yao Letsa, is a prominent patron and financier of the group’s activities, especially in years past.

Dr. Archibald Letsa has however denied supporting the secessionist groups in the Volta Region. “That is ridiculous”, Dr. Letsa told host of Accra based Class 91.3FM’s 505 news programme, who questioned him about the allegation which has been re-echoed by MP for South Tongu, Kobina Mensah Woyome.

“Valentina, I don’t want to answer that question because it’s ridiculous. We’ve been dealing with these groups since we came into office in 2017. How do I know them? How do I support them? Were they able to provide any evidence? Dr. Letsa retorted”

The MP for South Tongu claimed that one of the members of the secessionist group personally told him on phone that they had the support of Dr. Letsa. Mr. Woyome said he had called the Tongu Divisional Police Commander’s phone, who had apparently been briefly taken hostage by the militants and one of them answered it and mentioned the Regional Minister’s name as supporting the group.

Speaking on another radio interview, the Volta Regional Minister, Dr. Archibald Letsa said government was well aware of the planned attacks. According to him, this separatist group, along with 2 others, have been under the radar of the Volta Regional Security Council since 2017.

Dr. Letsa also revealed that the nation’s security forces had pre-empted the Friday morning attack by securing vital installations and it was suspected that the roadblocks on the Mepe-Sege road and the Accra-Ho road at Juapong were designed as a distraction. “We’ve been monitoring them for some time now for over two years since 2017. We were aware that there were going to be some activities last night and we had to protect some vital installation to make sure that the economy of the Volta region is not adversely affected. So we actually were able to prevent more serious attacks that were planned by this group”.

Security Analyst, Adams Bona is demanding the immediate resignation or dismissal of the Volta Regional Minister, Interior Minister – Ambrose Dery, Defence Minister – Dominic Nitiwul and National Security Minister – Kan Dapaah for intelligence failures and the embarrassment these incidents have caused to the nation.

Adam Bona who was speaking on Inside Politics, told Mugabe Maase on Accra based Power FM97.9 that, he was surprised that the President Nana Akufo-Addo has not made any official comment or addressed the nation on the security threat.

The security analyst said what is even more disturbing is the decision by the Attorney General and Minister of Justice – Gloria Akuffo to discontinue the treason charges levelled against the founder of the Homeland Study Group Foundation – Papavi Hogbedetor.

“The President, Nana Akufo-Addo must be directly held responsible for these attacks. Gloria Akuffo and her two deputies, are also complicit. Then the heads of the various national security agencies. They have all been so negligent when it comes to these secessionist groups. By now the President should have addressed the nation” Adam Bona explained.

Adam Bona added “Ghanaians are not angry enough. The AG should come and explain why she said she was no more interested in pursuing the case against the leader of the Homeland Study Group Foundation and those arrested about two years ago when their activities sprang up. Maybe the AG, Gloria Akuffo has some information, we don’t know he told Mugabe Maase”.

The Security Analyst asked “How do you want people in the Volta region to react? How secure are they? The people were recently subjected to threats when there was heavy deployment of Police, Military and Immigration officers under the guise of securing the borders during the voter registration exercise. Is it another attempt to make excuses for more future deployments?”

Thirty-one suspects including a female have so far been arrested and are currently in custody in Accra. Rumours are rife that many of those arrested are ordinary residents and have little to do with those involved in the insurgency attacks many of whom managed to escape arrest. The Police have also not yet retrieved any weapons stolen from the Police armouries.

Ghanaians are still yet to come to terms with how the insurgents were able to beat national security intelligence, and succeeded in overpowering Police officers at Aveyime and Mepe Police Stations, and broke into their armoury to steal weapons. The armed men who launched their attacks around 2 am on Friday, mounted roadblocks on the Mepe-Sege road, the Accra-Ho road at Juapong and the Accra -Sogakope-Aflao road close to the main bridge.