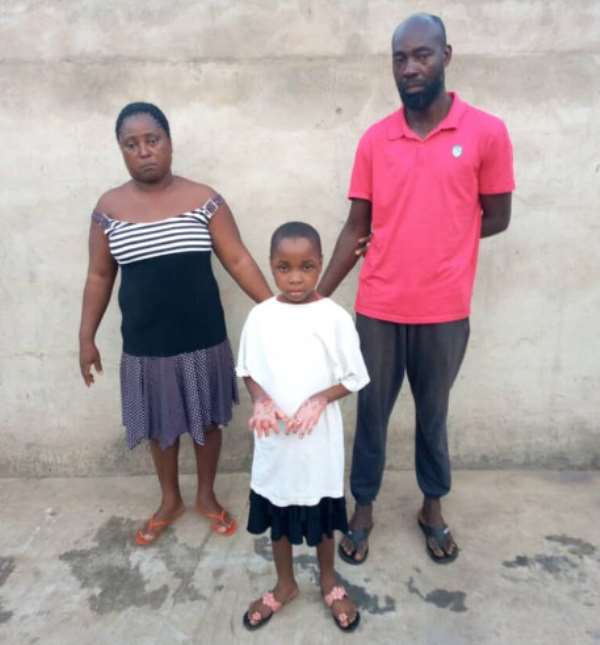 “It is terrible and horrible,” was the description given by shocked Akuse District Police Commander Superintendent Winfred Asare Nyarko to a 10-year-old girl with both hands scald by her Auntie.

Both hands of the victim were burnt with hot water by her Auntie-Vera Koranteng, 32, for not performing house chores to her satisfaction.

After committing the act, the suspect and the husband Augustine Adokpa Gameli,34, refused to send the victim to Hospital to seek healthcare to treat her injuries.

The couple has been arrested by Akuse Police and will be put before Court Tuesday, September 29,2020 .

The Akuse Police Commander Superintendent Winfred Asare Nyarko narrated to Starr News that, the victim (Eva) and her seven-year-old brother were taken from their parents in a village by the suspect to live with her and the husband Augustine Adokpa Gameli, at Kpong in the Lower Manya Krobo Municipality of the Eastern Region.

He said on September 23, 2020, Akuse Police received Information from Kpotoe that uncle of the victim has reported the incident to Police in the area but transferring the case to Akuse since it happened at Kpong.

The Akuse Police Commander said during investigation it was revealed that “about three months ago this couple whose names are Augustine Adokpa Gameli, 34, wife Vera,32, years they went for this young girl Eva and brother Christopher from the parents – Eva is 10 years and Christopher is 7years.

“They took the children from the village to Kpong to go to school. One day Vera instructed the girl to do some house chores. This girl according to our Information couldn’t perform to the satisfaction of the suspects so when the woman came to the house she saw the victim watching TV with her siblings. Already this Woman had instructed her 15-year-old girl to put hot water on fire, a purpose yet to know”.

“This woman came and was very furious therefore pour this hot water in a container called Eva and put the two hands into it. After that, she poured cold water on the hands and warned all the children that when the husband comes from work they should not tell him. She added that if her husband continues to ask they should say hot oil accidentally poured on the hands. The father came and was told visa versa but instead of sending the girl to the hospital they used some local treatment so it took them about three months,” he narrated.

The Police Commander stated that “one day the victim’s uncle came for a visit and saw the burnt hands so he took them to a village called Wudome near Kpotoe. The victim told the uncle about everything. So the Uncle reported the case to Kpotoe Police”.

The couple has been granted bail to appear before court Tuesday.