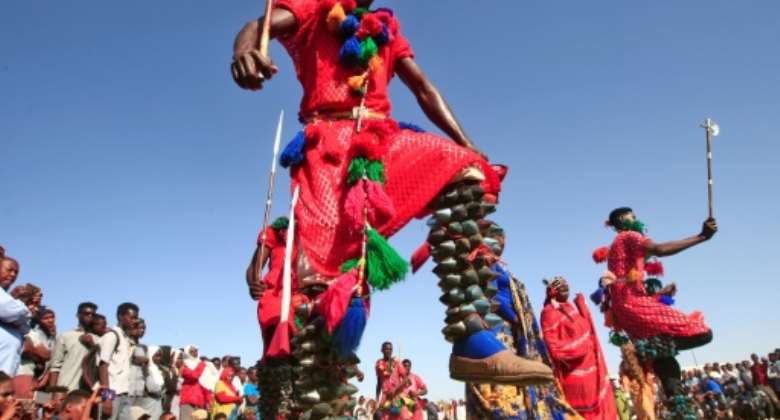 Dancers in Sudan's capital Khartoum celebrate on the anniversary of the uprising that toppled president Omar al-Bashir -- now many who fled are returning. By Ebrahim HAMID (AFP)

After 33 years in exile, El Sadig Mohamed gave up the easy life in Canada to return to help rebuild Sudan as it emerges from three decades of autocratic rule.

"After the revolution... I thought it's the right time to come back... despite the luxury people enjoy in the West," said Mohamed, who now heads the Sudanese Mineral Resources Company's health and environment department.

Ousted president Omar al-Bashir ruled the country with an iron fist for 30 years until his overthrow in April 2019 after months of youth-led street demonstrations.

"The Bashir regime, for 30 years, destroyed everything," said the 55-year-old civil engineer and ex-University of Calgary professor, who came home in November, six month's after Bashir was toppled.

"I believe it is my duty to take part in... building a new Sudan."

Sudanese civil engineer El Sadig Mohamed lived in exile in Canada for decades, but he returned to help his country rebuild after ex-president Omar al-Bashir was ousted. By ASHRAF SHAZLY (AFP)

The expert help is needed.

Sudan's economy is in crisis, laid low by long years of civil war under Bashir's rule, US sanctions and the 2011 secession of the oil-rich south.

His home in Sudan's southern Nuba Mountains was attacked by government forces, and Ardol had led rebel forces against them.

Former Sudanese rebel commander Mubarak Ardol returned from exile in Uganda to Khartoum after the old regime was toppled in 2019. By ASHRAF SHAZLY (AFP)

"I thought the regime would not last long. We worked with all our might to overthrow the regime," said 38-year-old Ardol.

"I felt certain I would return home very soon."

So when Bashir was forced out, Ardol returned from Kampala as quickly as he could.

"I came back immediately," he said. "I was the head of the first armed group which arrived in Khartoum on May 10, 2019."

He was appointed by Prime Minister Abdalla Hamdok -- a fellow returnee, who has made striking peace with the rebels who fought Bashir a priority.

Ardol aims to boost the revenues of SMRC, the African country's top moneymaker.

"We far exceeded our targets," he said.

Among the hundreds of exiles streaming in from around the world since last year, Mohammed Abdulhamid said he is "happy and proud" to have come back to take the reins at the state news agency SUNA.

"We knew it was a big challenge... I'm back home because I wanted to return, because I feel I can be a part of what is happening," said the 64-year-old journalist, in the agency's Khartoum offices.

Abdulhamid lived in Yemen before moving to the Netherlands where he launched Arabic-language radio and television broadcasts.

Mohammed Abdulhamid left Sudan decades ago but is "happy and proud" to have returned, and now heads the state news agency SUNA. By ASHRAF SHAZLY (AFP)

"I am proud of what I am doing, and I never regretted my decision."

But the return of exiles from the US, Britain and the Gulf to fill government posts and succeed figures in Bashir's Islamist regime at the head of state enterprises has not been universally welcomed.

"They've come to reap the rewards of victory, but it was us who suffered," grumbled Amine Bashir, a 32-year-old entrepreneur and activist.

Adeeb Youssef, a Darfur provincial governor who lived six years in the United States after having served time in jail and escaped assassination, had advice for both sides in the new Sudan.

Sudan's ousted president Omar al-Bashir as well as several former top officals are on trial in Khartoum for a 1989 coup that brought him to power. By ASHRAF SHAZLY (AFP)

"This kind of jealousy doesn't help," said Youssef. "People who've lived abroad can bring this experience and knowledge... they see problems and issues in Sudan better than people who lived here."

Mohamed said that returnees have to be "very diplomatic".

"Until now they have welcomed us. But if they see anyone acting arrogant, they take it badly," he said.

"The challenge for people coming from outside is that they are used to working in a system where everything is organised."