I Bet, Only A Miracle Can Persuade Beneficiaries To Send Free SHS Critic To Jubilee House 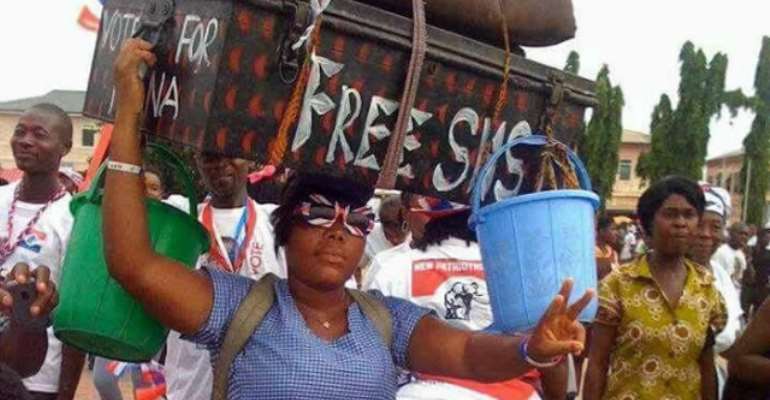 Upon a carefully considered reflection, I would like to submit that the good people of Ghana made a catastrophic mistake by voting the NPP government out in 2008 general elections, as Ghana, so to speak, was heading towards the right direction following the eight years of prudent governance by Ex-President Kufuor and his equally dynamic team.

The good people of Ghana, unfortunately, fell for the NDC’s well-executed political stratagem and voted out the NPP government in 2008 despite the NPP government’s pragmatic programmes and policies which put the country in a highly favourable economic position.

Back then, the New Patriotic Party (NPP) communicators, as a matter of fact, displayed sheer complacency and disappointingly failed to counter the NDC’s political gimmicks.

If we go down memory lane, former President Kufuor passed on the baton to the late President Mills on 7th January 2009, following his victory in the December 2008 general elections.

Suffice it to stress that the late President Mills was extremely fortunate to have inherited a very good economic foundation laid by the forward-thinking President Kufuor and his equally hard working team.

Take, for instance, three years after former President Kufuor’s NPP government had discovered oil in commercial quantities, the late President Mills had the joyous task of turning on the valve at an offshore platform in December 2010 to pump the first commercial oil.

And, lo and behold, Ghana joined the petroleum exporting countries. Believe it or not, Ghana started to export crude oil and thus boosted the economic growth.

The economy grew auspiciously from around 8.4 per cent to around 14 per cent by 2011, and Ghana thus reached the Lower Middle Income status.

“Ghana has come a long way and is the world's fastest growing economy today-2010.

“Ghana's economy is growing at a blistering 20.15 per cent, says Economy Watch.

“Blessed with rich reserves of natural resources, Ghana has suddenly turned around and is now speeding along the growth path.

“Ghana is oil-rich, has large gold and diamond deposits, and has a booming tourism industry” (Economy Watch 2010).

And, who says that the favourable economic foundation laid by former President Kufuor and his team was not the main contributory factor in the Ghana’s economic upsurge?

The then vice president, Mahama, (the automatic successor to the presidency) and his government officials had a field day leading to the 2012 general elections.

Mahama and his apointees went ‘haywire’ in their desperation to cling on to power. Thus they broke all conventions. Many government departments spent over and above their allocated budgets, which brought about double budget deficit amid huge and unmanageable debt stock.

With all due respect, former President Mahama had had an ample opportunity to show discerning Ghanaians his ability to steer the nation to the right direction, but woefully failed to do so. So, what can he do at the presidency next time around?

Strangely though, Ex-President Mahama and his teeming supporters are moving up and down the country and unfairly criticising President Akufo-Addo who is prudently fixing the humongous mess left behind by the erstwhile NDC administration.

Perhaps more than anything else, Ex-President Mahama and his loyalists are still holding on to the elusive belief that Ghanaians suffer from memory loss and therefore cannot recollect the revoltingly ugly events which took place under their watch.

Dearest reader, if that was not the case, what would then drive a president who wilfully brought the country to its knees through catastrophic decision-making to persistently accuse his successor who is doing everything humanly possible to undo the massive mess?

But contrary to former President Mahama’s seemingly isolated view, discerning Ghanaians have miraculously overcome their hitherto beguiling, albeit harmful memory loss, if the 2016 election was anything to go by.

In fact, we cannot deny or hide the fact that former President Mahama and the vast majority of the brassbound NDC loyalists have been going through a process analogous to Dr Elisabeth Kubler-Ross’s stages of grief.

We have, unfortunately, been witnessing unbridled reactive emotional responses from the likes of former President Mahama ever since the NDC lost the 2016 election to the NPP.

Given the unpardonable economic mess under his watch, Ex-President Mahama should do the right thing by eating humble pie and apologise to the good people of Ghana for wilfully messing up the once favourable economy.

What is more, there are those who do not understand how and why Ex-President Mahama could find it somewhat convenient to chastise Akufo-Addo for allegedly implementing the Free SHS policy at the expense of other developmental projects (see: ‘Free SHS crippling other sectors-Mahama, classfmonline.com/ghanaweb.com, 24/02/2018).

In fact, the seemingly inconsistent remarks have left deserving doubts in the minds of discerning Ghanaians as to whether if voted into power, Mahama will have the will and commitment to maintain the Akufo-Addo’s Free SHS.

Somehow, Mahama prefers “Progressively Free” (whatever that means) to NPP’s Comprehensively Free SHS. Unsurprisingly, therefore, the good people of Ghana cannot fathom how and why the NDC’s ‘Progressively’ Free SHS which has a budget of GH48 per student is better than the NPP’s GH1844.27 per student a year.

From the look of things, the critics cannot be far from right in suggesting that Mahama will most likely cancel the Free SHS in the unlikely event of returning to the Jubilee House.

Suffice it to emphasise that the vast majority of Ghanaians are benefiting immensely from the policy, including my maternal uncle, Oliver, a diehard NDC supporter, who had earlier criticised the apparent poverty alleviation Free SHS.

But despite my Uncle Oliver’s needless and never ending pessimism, he is on course to reap tremendous benefits and will most likely decline to endorse Mahama to come and cancel the policy.

Gratifyingly, the Akufo-Addo’s government will spend not less than GH5532.83 over a period of three years on each student.

So, my uncle, Oliver, who has three of his children in SHS, will be pocketing not less than GH16598.49 over three years.

Who can then persuade my maternal uncle to turn down such a juicy offer and vote for the unrepentant critic of the Free SHS who may well abandon the policy?

Trust me, should the Free SHS beneficiaries make an unpardonable mistake and hand over the poverty alleviation free SHS policy back to the NDC government in the near future, the supposedly social democrats will gleefully revert the comprehensively free policy to their much touted ‘progressively free’ (whatever that means).

Nevertheless, given the Free SHS beneficiaries unwavering doubts over Mahama’s commitment towards the policy, some of us, as a matter of conviction, do not envisage the NDC returning to power anytime soon with former President Mahama.