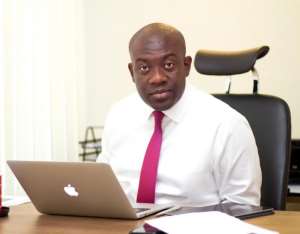 The Information Minister, Kojo Oppong Nkrumah, has disclosed that security agencies are working hard to arrest the financiers of the secessionist group, Homeland Study Group Foundation.

The group has deployed several means to have Volta, Oti, parts of the Northern and Upper East Regions declared an independent country called Western Togoland.

Last week, members of the group blocked a number of entry routes into Volta Region but there were defeated by Ghana’s security agencies.

Speaking at a press briefing on Sunday, September 27, 2020, Kojo Oppong Nkrumah stated that the government has already gathered intelligence on these financiers and wants the security services to round them up.

“Yes we know where the funding is coming from and the various agencies are moving in as part of a comprehensive program to deal with this whole phenomenon. And we are also moving in to deal with their sources of funding and persons who we believe are associated with the funding of this group,” he said.

Mr. Nkrumah also said that the security agencies have been able to calm situations down and are making efforts to contain the threats coming from the secessionist group.

He said, “Key actors who have been identified as ultimately responsible for these events are also on the watchlist of the security agencies and are actually wanted at this point in time. In the coming days, the security agencies would be publishing some photos and revealing identities of persons involved,” the Information Minister added. Background

The Homeland Study Group Foundation (HSGF) led by 85-year-old Komi Kudzordzi, on November 16, 2019, declared independence for the imaginary country they called Western Togoland, after a group meeting was held in Ho.

Some of the members were subsequently arrested in different parts of the country but were granted bail.

After they recently blocked roads leading into Volta Region, about 31 members of the secessionist group have been arrested and have been airlifted to Accra.

Thirty of them were arrested in Juapong in the Eastern Region and one other was arrested at Akuse in the Volta Region after their alleged involvement in the blockade of some entry points by road to the Volta Region.