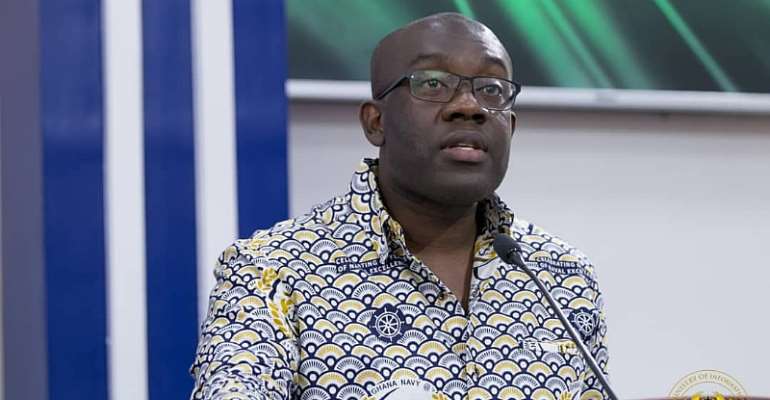 Government has vowed to treat recent roadblocks and attacks by the Homeland Study Group Foundation (HSGF), a group agitating for the secession of part of the Volta region as a criminal matter and not a political one.

Information Minister, Kojo Oppong Nkrumah, made this known to the media on Sunday afternoon, September 27, 2020.

He said the activities of the group will be looked at from the perspective of the breach of the law and not from political lense as some people have started doing.

It would be recalled that on Friday, members of the group allegedly blocked roads linking the Volta Region to Greater Accra and the Eastern Regions.

One person was reportedly shot dead in the process and some others injured.

Addressing the media, Mr. Oppong Nkrumah says government would not spare those behind the roadblocks and violent activities.

In recent months, he said, the activities of the group, has gained notoriety even as Government has been responding with appropriate force and then the rule of law.

He stated that efforts are underway to contain outstanding threats from this group.

He stated that government takes note of the condemnations of the actions of the group by the Council of State, National House of Chiefs, ordinary Ghanaians, among others.

He urged all well-being Ghanaians such as religious groups, to continue to express solidarity with government to deal with the group.

Key actors who have been identified as being behind the activities of the group, he said, are under the watch-list of the security agencies.

He however denied that the roadblocks was successful due to security failures on the part of national security agencies.

He stated that initial intelligence gathered was that members of the group were planning to burn the Ho Market.

He said 31 members of the group who were arrested have been airlifted to Accra.

The Minister stressed that the Group has been on the watchlist of the Security Agencies and were being monitored from time to time.

“Government is taking steps to deal with threats of succession expressed by a group in the Volta region and in particular the events of Friday, September 25 2020. Now in recent months the activities of this group has gained notoriety even as government has been responding with appropriate force and the rule of law. The events on Friday morning have been as at now contained by the security agencies.

Efforts are also underway to contain outstanding threats from this group,” according to the Minister.

The HSGF, a group championing the secession of parts of Ghana along the border with Togo last Friday blocked roads and hoisted flags as parts of agitation for independence from Ghana.

“We continue to encourage all well meaning Ghanaians especially traditional religious and political groups to express solidarity with the Republic and join in the efforts of holding the One Nation agenda while condemning these unfortunate developments. Now while the security agencies maintain a presence to avert any further developments, it will also be important to know that in the coming days provide more education, for example on the false basis for which the persons who are leading these exercises sort to mobilize support,” he said, while condemning the actions of the group.

“Key actors who have been identified as ultimately responsible for these events are also on the watchlist of the security agencies and actually wanted at this point in time. In the coming days the security agencies would I think be publishing some of the photographs and identities of persons who link to the group. Residents of these areas are encouraged to remain calm and to go about their daily lives without fear,” the Minister noted.

Mahama was disastrous in managing Ghana’s education — NPP’s ...
23 seconds ago