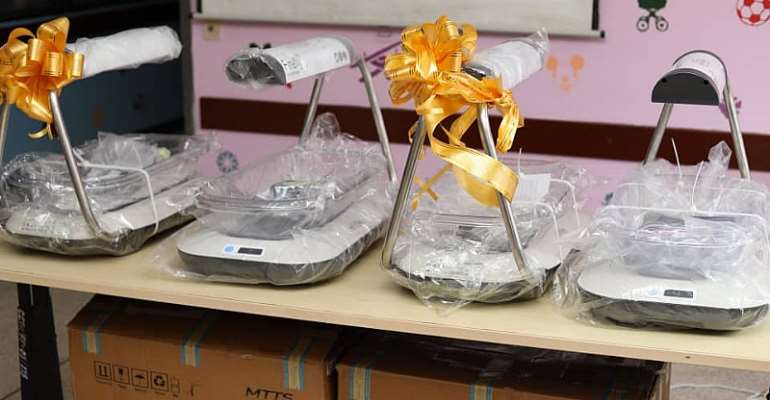 Latter-Day Saints Charities, the Humanitarian Wing of The Church of Jesus Christ of Latter-Day Saints has presented four new Firefly Phototherapy equipment to the Cape Coast Teaching Hospital in the Central Region.

The Firefly Phototherapy machines are meant for the treatment of neonatal or newborn jaundice.

Neonatal jaundice is a yellowing of a baby’s skin and eyes which can occur when babies have a high level of bilirubin, a yellow pigment produced during normal breakdown of red blood cells.

Reports have it that high level of neonatal jaundice can put a baby at risk for deafness, cerebral palsy, or other forms of brain damage.

Premature babies are at highest risk for developing newborn jaundice.

The Cape Coast Teaching Hospital records more than 300 newborn babies with high jaundice, but the facility did not have enough photography lights to bring their condition under control.

Presenting the equipment, Mr. Mahmud Labinjo, the Africa West Area Humanitarian Specialist of the Latter-Day Saints Charities said the Church has put in place a charity organisation to offer timely support to ameliorate the suffering of people.

He said the Church of Jesus Christ of Latter-Day Saints through the charity was determined to relieve suffering, foster self-reliance and give their members opportunity to serve others

Mr. Labinjo said maternal newborn care was one of the charity's major areas of intervention.

He said even though COVID-19 had taken a chunk of their attention and resources, the request for the firefly photography machines could not be overlooked.

The Humanitarian Specialist in the West African Office was confident that the equipment would serve a good purpose to save lives of many children.

Dr. Eric Kofi Ngyedu, Chief Executive Officer of the Cape Coast Teaching Hospital received the equipment and handed it over to Dr. Emmanuella Amoako, the Head of Paediatric Unit.

Dr Amoako on behalf of the hospital management commended the Church of Jesus Christ of Latter-Day Saints for the massive intervention.

She called on other charity organisations to emulate the kind gesture of the Latter-Day Saints.

The Firefly Phototherapy equipment is supplied by Africa Health Supplies who will also maintain the equipment for the hospital for the next two years.