Kufuor Did What Every Astute Politician Would Have Done 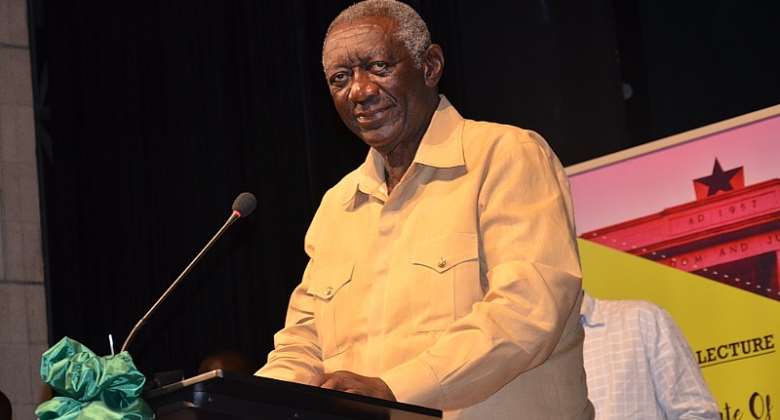 It is not clear to me why Peace-FM decided to publish the news piece or item, in Nigerian broadcast parlance, captioned “Kufuor Asked for Release of His ‘Seized’ Car Before Negotiating for Ghana – Ahwoi Discloses” Ghanaweb.com 8/8/20), except to prove that had the politically incarcerated Atwima-Nwabiagya Popular-Front Party (PFP) Member of Parliament (MP) not risen to the occasion, by electing to become part of a January 1982 “revolutionary” delegation to Lagos, to negotiate with Nigeria’s President Shehu Shagari for punitive oil-supply cutoff to be lifted, in the wake of the violent and illegitimate overthrow of Ghana’s President Hilla “Babini” Limann, the Jerry John Rawlings-led junta of the Provisional National Defense Council (PNDC) may very well have tottered on the brink or even possibly collapsed.

Well, maybe not, because it was very clear from the beginning that the Rawlings-Tsikata Mafia Cabal was determined to sacrifice at least half of Ghana’s approximately 12 Million people at the time to hang on to power. The entire strategy was paradoxical because while it logically and commonsensically enabled the slow-burning MP to negotiate himself out of the globally infamous Nsawam Medium-Security Prison, or the Kwame Nkrumah University for the Re-Education of the Political Opposition, the fact still remained that in opting to assist the democracy hijackers of the PNDC to beat Nigeria’s oil embargo, Mr. John Agyekum-Kufuor had also scandalously breached the principles of the democratic rule of law, staunchly endorsed and unreservedly propagated by the adherents of the Danquah-Busia-Dombo Tradition.

But, of course, it was equally savvy for Mr. Kufuor to have negotiated for some of his fellow political prisoners to be released from that notorious prison housing complex. As well, Mr. Kufuor reportedly negotiated for the loan balance of Ȼ 28, 000 (Cedis) remaining on his Peugeot Salon Car – not “Saloon” Car, as reported by Peace-FM, to be written off forthwith. That was a savvy decision. But his decision to agree to serve in Chairman Rawlings’ cabinet, as Secretary for Local Government and Rural Development was, at best, woefully ill-advised and one that would shortly come to haunt the former Deputy Parliamentary Minority Leader in Ghana’s Second Republic, in the wake of the brutal and apocalyptically barbaric assassination of the three Accra High Court Judges, namely, Justices Cecilia Koranteng-Addow, Kwadwo Agyei Agyepong and Frederick Poku-Sarkodie. But that Mr. Kufuor would choose to stay in Mr. Rawlings’ cabinet for about seven or eight months in the wake of this most heinous and emotionally and psychologically disturbing case of judicial ethnic cleansing, remains a blot on the Gentle Giant’s otherwise very impressive political career.

In some quite remarkable respects, however, Mr. Kufuor could be aptly envisaged as a savvy political pragmatist who made the best use of the opportunity that had opened up for him under the treacherous and volatile circumstances. On the latter count, the leader of the Popular-Front Party, Mr. Victor Owusu, a former Attorney-General and Minister of Justice and Foreign Minister in K A Busia’s Progress Party (PP) government, was the more principled idealist. You see, legend has it that Mr. Owusu had promptly advised the 31-year-old Ghana Airforce’s Flight-Lieutenant to either return power to the democratically elected Dr. Hilla Limann or call for fresh elections to be held, that is, if Chairman Rawlings genuinely and sincerely believed that a comeback President Limann would not be good for business. Legend also has it that Mr. Owusu had flatly rejected an invitation extended to him to become a part of the Rawlings’ cabinet, obviously because the former Nkrumah lackey and maverick Danquah lieutenant did not believe that Chairman Rawlings had what it took to successfully pilot the burning Ghanaian ship of state.

In retrospect, it well appears that the late Mr. Victor Owusu has been vindicated. Maybe one of these days, a monument may need to be erected in his name, that is, if this has not already been done, as of this writing.