National Cohesion: the consequences of Article 55(3) 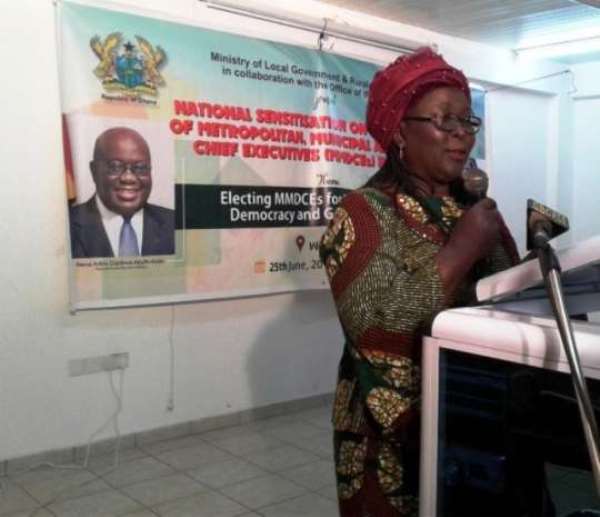 MMDCEs can be elected without the amendment of Article 55(3) if the elections do not take a partisan form. Article 243 should be the focus if the ruling party still makes it a manifesto item to be executed. This Article outlines the nature of appointment, functions and revocation of the appointment and powers of the MMDCEs. In dealing with this issue, the aspects of the Article of the constitution that concern appointment and revocation of the appointments of the MMDCEs or their removal in office need amendment.

The grounds for the election of MMDCEs to be made partisan are practically untenable. The net negative effects of this election taking a partisan form will be very deep on the country’s democracy. Monetisation of campaigns and other political processes and procedures, that have engulfed national elections, will be transferred to the grassroots. This will not help in building a clean society as both the local and national levels will be corrupted.

The New Patriotic Party desires to modernise grassroots democracy by allowing for the election of MMDCEs. If this is allowed to take a partisan form, it will inhibit development at the MMDAs. Meanwhile, development actually takes place at the MMDAs. It should, therefore, not be the ultimate policy objective or a manifesto item of the party to politicise the Assemblies.

Partisan political elections will create “political patriotism”, and tensions where individuals will have the preference to work for their parties rather than the Assemblies and the state at large. Even if the elections at the grassroots are implicitly partisan, it does not call for the election of MMDCEs to take a partisan form.

The election of MMDCEs by the local communities is believed, by local government experts, to have the solutions to advance local democracy and development of the grassroots. This is because, MMDCEs will account to the local authorities rather than the government. This will compel the MMDCEs to pursue programs and projects that actually affect the communities positively. Appointed MMDCEs render accountability upwardly, to the central government.

Making the election of MMDCEs partisan will worsen the marginalisation of many communities. It is believed that partisan national elections have the negative effects of marginalising communities in terms of development. Communities that support parties in opposition are likely to be marginalised with regard to infrastructure development and distribution of social amenities.

Partisan local elections will have similar negative effects on the development of the local communities. The political parties will use such elections to victimise communities that vote against them. The distribution of resources and infrastructure will be based on votes received by a political party. Presently, some communities are marginalised because they are known for supporting a particular political party.

A national cohesion is needed for developing the communities that make the state. It is therefore very clear and imperative that the levels of our politics will not permit such a situation (national cohesion) to exist if a partisan system is adopted. The political parties, therefore, need to sensitise their followers to recognise the importance of a national consensus or unity in development.

With several impediments with the execution of the agenda of the party and its Presidential candidate, there is the need to consider alternatives which will embrace the ideas and efforts of everyone concerned with development. The new alternative should have elements of national cohesion.

In connection with this, I suggest the ruling party develops the courage to have a system that opens the way to suitable candidates to contest and shuts the way to political participation. After all, the local level elections are won by the same parties, though implicitly contested. People interested in leading the Assemblies should be given the opportunity to contest for such positions by making the election an open one, without a partisan form. Parties may need to train their followers to shelve politics and divisions after such elections.

The roles of the Assemblies in nation-building are key that elections that affect their competent functioning should not be partisan. Let us choose an alternative that will incorporate the efforts and ideas of everyone. An amendment of Article 243 will help achieve this goal.

Economics Tutor, An Advocate and A religion Enthusiast.