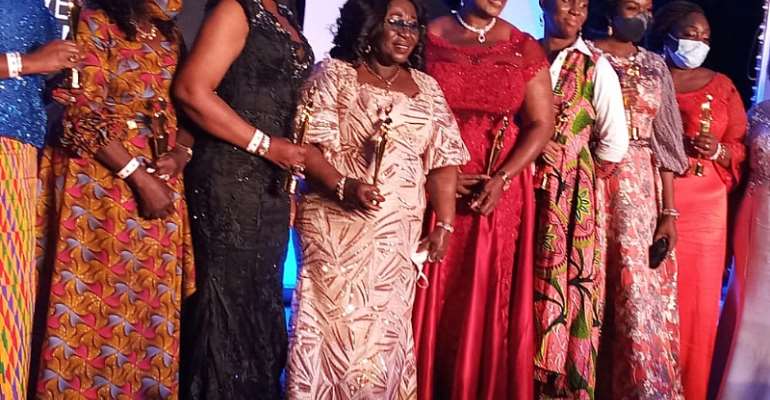 The Chief of Staff, Akosua Frema Osei-Opare, has been honoured with Excellence in Governance award, at the just ended Ghana Women of The Year Honours.

The 'Ghana Women of the Year Honours' is an award scheme instituted by Glitz Africa to celebrate women who use their expertise, position and influence to inspire others to make a difference in driving other women forward.

The Honourees were selected by an astute board of achievers who used clear and objective criteria in ensuring that the final list comprises the most deserving women in various fields.

Presenting the award, former first lady and flagbearer of the National Democratic Party (NDP), Nana Koadu Agyeman Rawlings, showered praises on the Chief of Staff for her exceptional quality in handling her role without hitch.

The Chief of Staff, on her part, expressed appreciation to Glitz Africa for the honour.

According to her, “I value this, and I am grateful for the recognition”.

The 5th annual Ghana Women of the Year Honours saw women from governance, judiciary, corporate, media among others being honoured.

The Chief of Staff in her acceptance speech, eulogised President Nana Addo Dankwa Akufo-Addo for his conviction in women and promotion of women empowerment in the country.

According to Mrs Osei-Opare, for the President to appoint her to the high office of Chief of Staff – becoming the first female to occupy that position – speaks volume of the president's desire to see women prosper and be given the needed voice they deserve in the country.

She stated that “I want to thank former President Kufuor for appointing me as a Deputy Minister in his government. But more importantly, I want to thank President Akufo-Addo for the trust he has in me. Making political appointments come with great risk. And for the President to take that risk and say that for the first time, he was going to give the position of a Chief of Staff to a woman speaks of the confidence he has in women”.

The 5th Annual Glitz Africa's 'Ghana Women of the Year Honours' Awards' night was held at the Mövenpick Ambassador Hotel.

The Chief of Staff seized the opportunity to urge women to welcome every opportunity that is given to them and to excel with that opportunity adding that it is when women value 'smaller' opportunities and excel at it that is when they will be considered for bigger opportunities.

She noted that all the positions she held during her days in academia, as Deputy Minister and Member of Parliament are those that have helped her to be able to manage her role as a Chief of Staff of the Republic.

Mrs Osei Opare also expressed her appreciation to the NPP footsoldiers of Ayawaso West Wuogon, where she served as a two-term Member of Parliament, for rallying behind her during those days and supporting her vision.

She went further to thank all persons who have played different roles in making her who she is now.