Is Destroying China-Ghana Relationship Really Worth It? 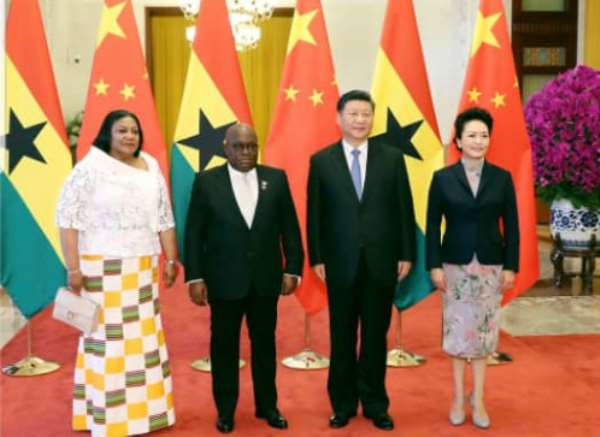 In the jungle, animals mock the tortoise because of its movement but least did they know that the tortoise is wiser but calm. Upon the self acclaim supremacy of other animals in the jungle, the least respected tortoise shows up with great ideas when the jungle is in crisis and, needs urgent attention before situations get worse.

Fast forward, to the 21st Century, when more and powerfully recognized countries as regards trade and technology, can't be overlooked; China has been able to establish herself as one of the leading countries if not probably the best, as far as technology is concerned.

The Chinese have been providing aid to countries all over the globe and Ghana is not exempted.

Currently, the economic assistance China provides Ghana is quite enormous as the Chinese aid projects include, a $6 billion concessionary loan from the China Export-Import Bank which Ghana is using to extend her rail network.

This is one of the vehicles that is geared towards enhancing the good tandem between Ghana and China.

Again, we shouldn't see the Chinese as a problem but rather a blessing in the sense that, Ghana would continue to benefit a lot from them if the relationship is strong.

We should also know that when we allow these Chines to set up their business here, there will be job creation which will create employment opportunities and also help push the country's ‘GDP’.

When we foster close ties with these Chinese and see them as allies, they will have their peace of mind to go about their businesses in the country without fear of being attacked by Ghanaians, as this relationship will benefit Ghanaians especially those in the rural areas.

A strong resistance group must be formed to expose people who tarnish the image of the Chinese in Ghana.

One thing we have to look out for is to establish a Chinese office to collaborate with the Ghanaian Immigration Service, and help to identify and also help sift their own law-abiding Chinese nationals from the illegal nationals who fly in for illegal activities

The following are some of the points to consider:

1. We can strategize to use investigative journalists to defend the reputation of the good Chinese and their businesses in the country.

2. Do an intensive investigation about the culprits who plot to tarnish the image of the Chinese and also expose them for people to know that the Chinese are a blessing rather than evil, as it has been speculated in the Ghanaian media and various communities. Since these Chinese can't defend themselves, they can be helped, by the media becoming the mouthpiece of/for the Chinese, because they are foreigners and do not always want to fight back.

If the strategy is well-executed, it will expose the bad people who instigate Ghanaians against the Chinese.

Attention should be given to this plan to help make Ghana benefit more from the Chinese and also make the Chinese feel comfortable in the country.

Ghana and China have recorded significant achievements that deserve acknowledgment. It is a fact that Ghana was one of the earliest and consistent advocates and supporters of the admission of China into the United Nations Organization and later a permanent member of the UN Security Council.

This paved the way for the acceptance of the People's Republic of China into the international comity of nations and restored its legitimacy as the only true representative of China to the United Nations.

Achievements on the Economic, Trade, and Investment front cannot be overemphasized.

The two countries have deepened their cooperation as China has provided Ghana with much needed economic support in the areas of finance and infrastructure development.

China is currently the largest investor in Ghana by a number of registered projects; it is also Ghana's biggest investor partner.