The Nile river led to Khartoum's growth, but now threatens the city

By Andrea Zerboni - The Conversation 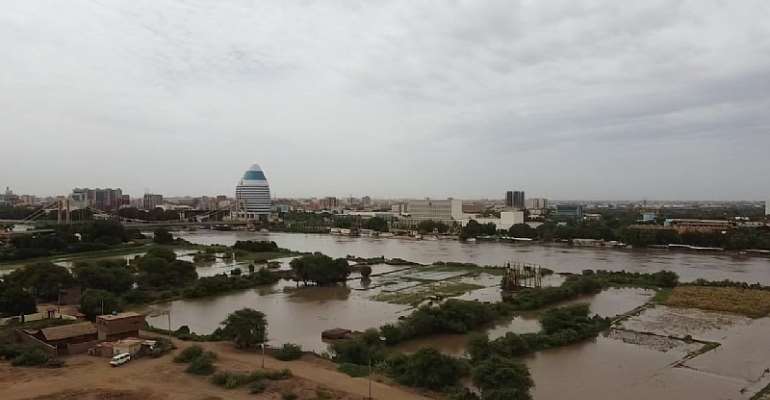 A view of flooded farmland on the riverbank and swelling Blue Nile as its water level rises after heavy rainfall in Khartoum, Sudan - Source: Photo by Mahmoud Hjaj/Anadolu Agency via Getty Images

Over the past few weeks, floods – following exceptionally heavy rains – have hit Sudan. Many parts of the country have been affected though it has been particularly destructive in Khartoum, the capital city.

In and around the city, flooding of the Nile River has killed almost one hundred people, destroyed more than 1,000 houses and the incidence of water-borne diseases is now also rising.

Along the Nile River in Sudan, floods are not unusual and destructive events have been recorded, for instance in 1946 and 1988. But, over recent years, the levels of the Nile River have risen considerably. The Blue Nile – one of the river's main tributaries – reached record levels several metres above its mean flooding level established since measurements started in 1912.

My colleagues and I recently published a paper which examined the relationship between Khartoum's development and the dynamics of the Nile Rivers. We found that flooding can be destructive in Khartoum because of how the city has grown.

With a population of about 5.8 million people , Khartoum is one of the largest cities in Africa. It's located in central Sudan, just south of where the Blue and White Nile rivers – the river Nile's main tributaries – meet. Opposite Khartoum, on the western side of the Nile, is Omdurman. Together they make up “Greater Khartoum”.

We found that, over thousands of years, the progressive migration of the Blue Nile river and seasonal floods of the Nile rivers created a fertile plain and continuously provided water for irrigation. This encouraged people to expand cultivation in the area and settle there.

Because of this, greater Khartoum grew without a proper urban plan. As a result, the city lacks an efficient sewer system and the most recent residential and industrial areas grew along the banks of the Nile rivers, which used to be farm land. These areas are the most vulnerable to flooding.

Extreme flood events may become more common in future because of changes in the weather, which are resulting in a wetter climate over the headwaters of the Nile and more water reaching the river and its tributaries.

Mega-rivers (as the Nile) and mega-cities (as Greater Khartoum) can co-exist, but good land practice is paramount. Urban flood management includes building of defences or artificial levees along river banks. It also means building must be avoided along areas of seasonal flooding. This however will require actions at the local and national levels. And government agencies must work closely with river basin organisations, such as the Nile River Basin Initiative.

Several types of flooding, caused by the Nile rivers, occur in central Sudan.

There are seasonal floods which occur each year between July and September when the Blue Nile, fed by heavy rains on the Ethiopian Highlands, reaches its peak discharge. These floods created the agricultural zone along the Nile.

Unusual flooding is typically the result of prolonged and heavier than usual rain which occurs in the Blue Nile's headwater in Ethiopia. The high Blue Nile levels act like a natural dam, partially preventing the free passage of waters of the White Nile. This in turn raises the White Nile's levels, flooding the areas south of Khartoum.

These exceptional floods, along with the absence of a proper urban plan, are what lead to destructive flooding.

During our research , we found that several urban plans were historically proposed for Khartoum, but due to a fragile economy, ineffective government institutions, and environmental issues not one of them was successfully adopted.

In addition, planning was difficult because of the rate of development in the Greater Khartoum area - a large number of buildings and people appeared in a short period of time.

Growth of a city

Khartoum's uncontrolled urban sprawl started in the second half to last century under the military regime (1969 - 1985), when the spur of farming in the region increased the number of inhabitants.

Between 1989 and 1999 the mainland around Khartoum used to be farmland. But the rapid growth of the city increased pressure on fertile areas and led to the conversion of arable land to building land.

The city, which started on the outskirts of the flood plain, continued to grow in the 2000s, leading to development in the desert region surrounding the Nile River.

This led to the spread of Omdurman and Khartoum North into previously unsettled areas. In the same period, the transformation of cultivable land to residential and industrial use accelerated. This was mostly around the Tuti Island and Khartoum North, along the main Nile River. This is the area that suffers from major flood damage today.

What needs to happen now

To address this, researchers are using geospatial data to establish the susceptibility of each part of Khartoum to floods. This will offer a tool that can be used to monitor the Nile River, reduce the risk of hazard, and thus mitigate the negative effects of flooding.

Maps, like these, will illustrate the sensitivity of Greater Khartoum to the risk of floods and model the Nile river's discharge, pointing to potential future risks. A comprehensive scheme using this data and integrating risk reduction to urban expansion and population increase is essential moving forward. This will require competent coordination between the relevant authorities to make it work.

We must keep in mind that floods, as much as other 'natural disaster', become destructive only when human intervention in the natural environment is not sustainable and not based on the study of geological process.

Andrea Zerboni does not work for, consult, own shares in or receive funding from any company or organization that would benefit from this article, and has disclosed no relevant affiliations beyond their academic appointment.