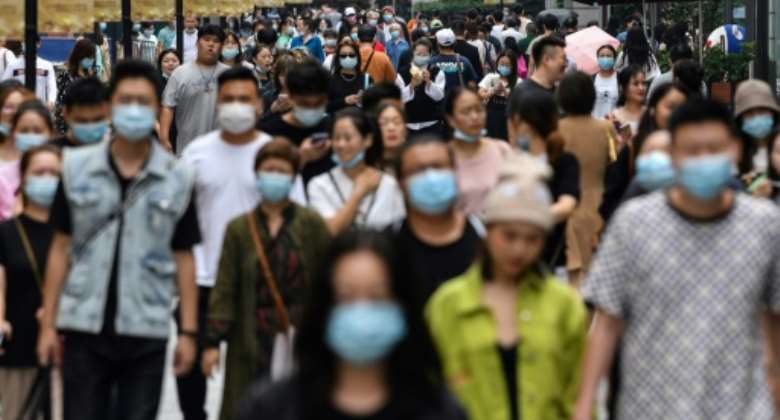 Many people in Wuhan, where the coronavirus first emerged, are still wearing masks despite there being no new cases since May. By Hector RETAMAL (AFP)

An overnight curfew in Australia's second-largest city will be lifted this week, officials said Sunday, even as the global coronavirus toll inched towards one million dead.

Despite the number of infections worldwide passing 32 million -- with the US state of New York reporting a fresh spike -- more than 10,000 anti-lockdown protesters demonstrated in central London ahead of the re-imposition of restrictions there.

In more positive news, residents of the Chinese city of Wuhan -- where the virus emerged last year -- reported a hesitant return to normalcy, while the French Open got underway at Roland Garros in Paris.

In Australia, Victoria Premier Daniel Andrews said Melbourne residents would be free from Monday to leave their homes for work, exercise, shop for essentials, or provide care after active cases in the state fell below 400 for the first time since June 30.

People exercise at a park along the Yarra River in Melbourne a day before lockdown restrictions were to be eased. By William WEST (AFP)

The relaxation of the curfew, imposed August 2, comes after 16 new infections and two deaths were reported Sunday.

People will still be confined to within five kilometres (about three miles) of their homes, and fines for breaching other restrictions will be increased to almost Aus$5,000 ($3,515).

Andrews said several other restrictions, including on religious services and childcare centres, will also be lifted.

It was a different story in the UK, now battling to contain a mounting second wave, as thousands marched in London on Saturday against coronavirus restrictions.

At least 10 people were arrested as police moved in with batons to disperse more than 10,000 protesters gathered in Trafalgar Square.

This week Prime Minister Boris Johnson's government imposed a ban on gatherings of more than six people and ordered pubs and restaurants to close at 10 pm in a bid to slow the spread of the virus, which has claimed 42,000 lives in the country so far -- making it the worst-affected nation in Europe.

In New York state -- once the epicentre of the US outbreak -- new infections rose for the first time since June to above 1,000 a day, local officials said.

In India, meanwhile, infections closed in on six million on Sunday as Prime Minister Narendra Modi called on people to keep wearing face masks in public.

"They are potent tools to save the life of every citizen," he said.

Health ministry figures showed that the total number of cases had risen to 5,992,532.

India is expected to take over the United States -- which has reported more than seven million cases so far -- as the worst-hit country in the next few weeks.

In Paris, a limited number of spectators will watch live tennis for the first time in months as the French Open starts -- four months later than scheduled.

It will be an eerily unfamiliar tournament as a resurgence of the virus means only 1,000 spectators will be allowed into the grounds each day.

For residents of Wuhan, where the coronavirus first emerged late last year, life is already back to normal.

There have been 50,340 confirmed cases and 3,869 deaths in Wuhan, according to the official figures -- the majority of mainland China's toll -- but no new infections since May.

Families are once again packing amusement parks, and shopping streets were full over the weekend -- although residents remained cautious.

"The people have experienced tragedy and deeply know that a happy life is not easy to come by," said a woman named Wang.