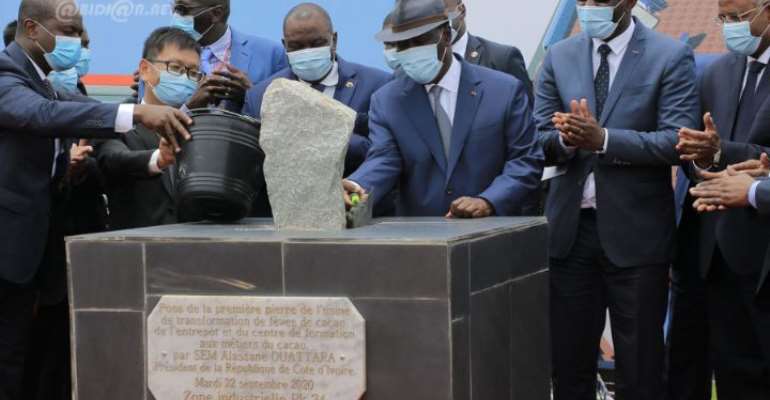 The article below, posted on Tuesday, September 22, 2020 on Abidjan.net highlights the efforts by the government of Ivory Coast to increase its processing capacity of coca beans. This expansion of Ivory Coast’s manufacturing sector is positive. For emerging African nations to develop and improve the living standards of their people, it is necessary to increase their manufacturing sector as thy move to industrialize their economies. African nation nations cannot any longer allow themselves to be dominated by extraction of their natural resources.

The Head of State, Alassane Ouattara proceeded on Tuesday, September 22, to the laying of the first stone of a cocoa bean processing unit at the PK24 industrial complex in the town of Anyama. The Chinese Ambassador to Côte d’Ivoire and several ministers took part in the ceremony.

“These facilities will contribute to the industrialization of our country and promote job creation for the populations,” said Alassane Ouattara. The head of Eta has expressed the wish that by 2025 Côte d’Ivoire will be able to transform 100% of its cocoa production on site. “Next year, projects of this kind will allow us to achieve a growth rate of 8%, which means that it is an essential project,” said Alassane Ouattara. This official ceremony of the laying of the first stone marks the launch and start of construction work on two cocoa bean processing units on two sites with an area of ​​21 hectares each in Abidjan and San-Pedro. The two cocoa bean processing units will have a capacity of 50,000 tonnes each. In addition to these two processing units, two 300,000-ton storage warehouses will be built on each site. The products can be stored there for a period of two years. Finally, the PK24 site will host a training center for cocoa trades to participate in the development of human capital.

The Director General of the Coffee and Cocoa Council, Koné Brahima Yves announced during the ceremony that the overall cost of this project is estimated at 216 billion FCFA. “The financing was only possible thanks to the excellent relations between Côte d’Ivoire and China, the support of the Ministries of Agriculture, Economy and Finance as well as that of Trade and industry, ”revealed the CEO of the cafe-cocoa council. Still according to Koné Brahima Yves, the work will end in 24 months on the two sites. “It should be noted that in the implementation agreement for this project, 40% of the production of factories will be intended for the Chinese market,” said the CEO of the coffee-cocoa council. Finally, the regulator announces that after the completion of these factories, the capital will be open to the private sector.

The implementation of this pilot project by the Café-Cacao council is part of the National Development Plan (PND). It will help make the coffee-cocoa sector more efficient and able to meet internal demand. Also, this project will promote innovation and technological development.