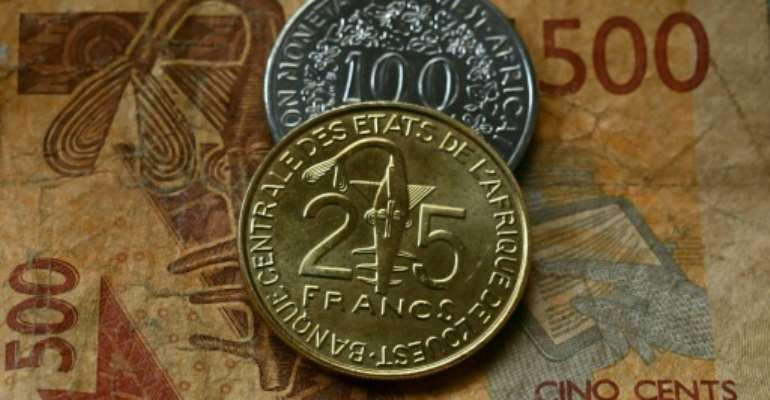 Chiefs of the 15-nation Economic Community of West African States (ECOWAS) regional bloc said in 2019 the Eco would be set up in 2020. By Issouf SANOGO (AFP)

Hopes raised by West African leaders of finally launching this year their "Eco" common currency, in the pipeline for three decades, have faded as the coronavirus crisis and squabbling over severing the remaining monetary ties to former colonial ruler France snarl progress.

Chiefs of the 15-nation Economic Community of West African States (ECOWAS) regional bloc said last year the Eco would be set up in 2020 but the short time frame was not enough for the sheer logistics involved.

Ahead of the euro's launch, its founding nations took 15 years to grind through preliminaries like setting up a central bank, deciding on an exchange rate regime, minting coins and printing banknotes and updating IT systems and bureaucracy.

The impact of the coronavirus pandemic has now definitively skewered the African bloc's ambitious timetable.

This was exacerbated by an imminent reform supposed to switch eight ECOWAS members who use the CFA Franc, which ties their economies to former colonial ruler France, to the Eco.

The push by CFA franc countries to move ahead alone has riled English-speaking neighbours like regional powerhouse Nigeria, even as the reform doing away with the franc has blown through a July deadline.

Niger's President Mahamadou Issoufou, whose country also uses the CFA franc, urged fellow leaders at a September summit to "come up with a new roadmap, sticking to a gradual approach for launching the common currency".

For Yao Prao, economics professor at the University of Bouake in Ivory Coast, Issoufou's appeal heralds "not a burial, but a delay" for the Eco.

"It's a question of political will. Five years would be enough to get there," he judged -- frictions between ECOWAS member countries notwithstanding.

For now Nigeria, which by itself accounts for 60 percent of the bloc's GDP and 180 of its 300 million inhabitants, wants CFA franc countries organised in the existing West African Monetary Union (WAMU) to completely break currency ties with France, exceeding the reform plan already announced.

Under a bill approved by the French cabinet in May, once the Eco arrives the Bank of France would no longer hold CFA countries' reserves, and Paris would withdraw from institutions like the Central Bank of the West African States (CBWAS) and WAMU's banking commission.

But the new Eco envisaged would remain pegged to the euro, while France would stand ready with a euro-denominated credit line in case the CBWAS ran into a currency crunch.

WAMU countries signed up to those conditions -- having had a front-row view of the currency woes of their neighbours who do not use the CFA -- want to avoid such risks to the Eco.

More fundamentally, if a new attempt at the Eco is to succeed, "we have to have a debate on the convergence criteria like inflation, debt and public deficits," economist Prao said.

Divergence across countries on such economic factors has dogged the euro since its introduction, and attempts to bring them into line in part caused the drawn-out crisis following the 2008 financial crash.

While Prao said it would be positive for West African nations to have a common currency, he also struck a note of caution.

"Let's not try and imitate Europe: we can't have its introduction leading to austerity policies that harm growth and employment," he said.

For now, any hope of ECOWAS members falling into line with convergence goals has been stymied by the coronavirus crisis.

Ivorian economist and former minister Daniel Anikpo predicted that the Eco "won't see the light of day... the political will isn't there".

"When I was a minister in 2000, we were already talking about getting it done in five years," said Anikpo, who long fought for an independent common currency.

"We can't wait around for a thousand years for all the incompatibilities between the countries to be fixed."