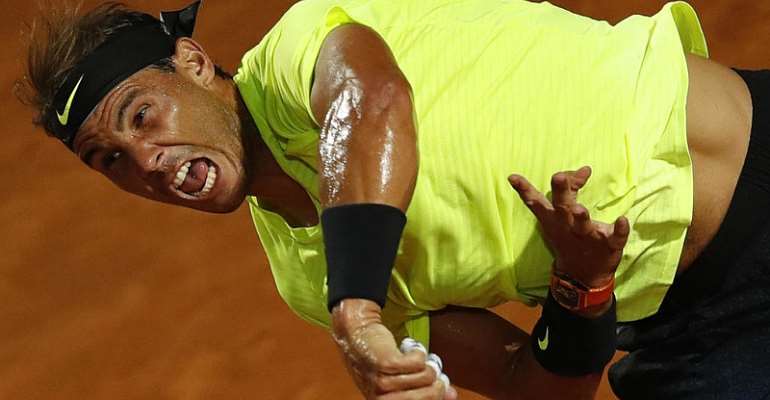 A song by the British band Massive Attack should be on repeat for the organisers of the 2020 French Open which starts on Sunday.

Just be thankful for what you've got talks of ambitions, comparisons and disappointments.

Indeed, the French Tennis Federation (FFT), which arranges the most the most prestigious clay court tournament on the circuit, took a massive hit on Thursday when the French government said only 1,000 people per day would be allowed into the Roland Garros stadium to watch the action.

The FFT had developed a plan for 11,500 spectators a day in three separate compounds.

But with the number of coronavirus cases rocketing in red zones such as Paris, the figures were slashed.

"We deeply regret these new restrictions," the FFT said in a statement.

Comparisons
Bernard Giudicelli, the FFT president, said: "Five thousand spectators daily in the stadium was already in our eyes a minimum."

There will be huge financial implications from the reduction.

"We are in the process of quantifying but tens of millions of euros have gone up in smoke," said Stephane Morel, the FFT's marketing boss.

But relatively speaking, the French Open is in bloom after managing to switch from its traditional date in late May to September.

The US Open in New York, normally the final Grand Slam tournament of the season, did not have any spectators watching the matches.

Wimbledon should have been held in July on the hallowed grass courts of the All England Lawn Tennis club in south-west London.

But that garden extravaganza was cancelled altogether.

Ambitions
FFT bigwigs highlighting financial losses as the World Health Organisation predicted around 2 million deaths before a vaccine is found appeared a tad out of synch. Especially since those same chiefs in May said they were braced for absolutely no fans on the site.

"We haven't ruled out any option,” Guidicelli told the French newspaper Journal du Dimanche. “Roland Garros is first and foremost a story of matches and players.”

It is also an annual tale of contracts and sponsorships with TV rights accounting for more than 30 percent of the revenues during the fortnight of action.

Changes
Not ideal for the FFT. But at least something. And those fans who do manage to get inside the 12-hectare site on the western fringes of Paris will experience a French Open like no other.

There is a shiny new retractable roof on Court Philippe Chatrier. Timely it is too. Rain is forecast for the first week of competition so the big names scheduled for the arena will at least be able to complete their matches.

The lesser lights as well as the journeymen and women will have to take their chances amid the autumnal downpours on the outside courts.

But even bowing out early will bring a bonus. First and second round losers in 2019 received 46,000 and 87,000 euros respectively.

This year they will receive 60,000 and 84,000 euros. Rafael Nadal and Ashleigh Barty both pocketed 2.3m euros for lifting the crown last year.

This year's winners? 1.6m euros. “We have thoroughly revised our prize money for 2020 to show solidarity with those players who are experiencing a particularly dificciult year,” said tournament director Guy Forget.

The intrigue remains, of course, as to who those ultimate champions will be.

Normally the Spaniard is aided by the temperatures of May and June when the heat helps him create vicious topspin on his ground strokes.

Those missing 10 or 11 degrees could well separate him from his title. Not to mention the Wilson balls.

Don't mention the ball
"I think it's not the right ball to play on a clay court," said the 34-year-old Spaniard of the Wilson

"I really believe that the organisation needs to take a look at that for the next couple of years, for the health of the players, too, because the ball is super heavy and becomes dangerous for the elbow and for the shoulders.''

And he has very broad shoulders. Top seed Novak Djokovic extended his own record-breaking exploits in January at the Australian Open where he won the title for an eighth time.

With Robin Soderling, he is the only other man to have beaten Nadal at Roland Garros. Soderling dispatched Nadal in the last 16 in 2009 and Djokovic eliminated him in the last eight in 2015.

Beatable
Djokovic, after his victory at the Italian Open on 21 September, said Nadal would always be the favourite in Paris.

"Rafa likes the hot and warm and fast conditions, where he can use his spin a lot," said Djokovic. "Let's see. It's going to be interesting. I think even though he's the number one favourite, I think there are players that can win against him there.”

None of the women have dominated Roland Garros in a similar way since Nadal's first triumph in 2005.

There have been 11 different female winners since 2005 compared to four - including Nadal - among the men.

The 2019 women's champion, Ashleigh Barty, pulled out of the 2020 tournament due to her fears over the coronavirus leaving the 2018 champion Simona Halep as top seed.

Of the other champions, Svetlana Kuznetsova, Serena Williams Jelena Ostapenko and Garbine Muguruza will be in Paris.

Williams, 39, says she is nursing a strained achilles and Halep says she's got a few niggles too.

"I feel happy that I will have a chance to play another Grand Slam this year," she said after winning the Italian Open.

"I'm not going to let myself be bothered by the weather or some slight injuries. I just try to be happy, to take the positives from this tournament and to go to Paris smiling."

A certain song comes to mind.