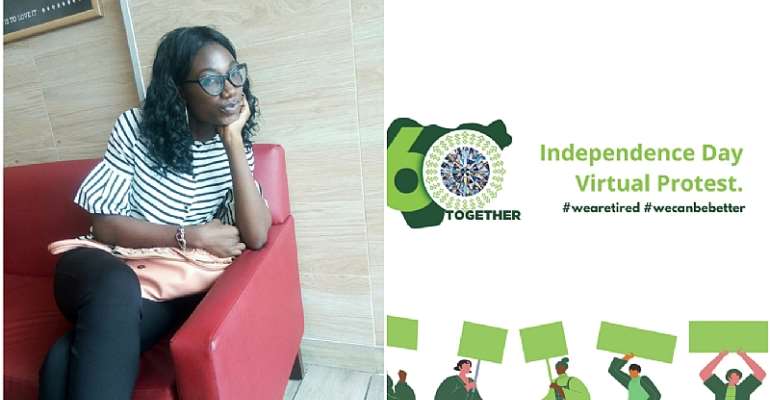 Abasi Joy Una, a Nigerian lady has called on the people of Nigeria to embark on a global scale virtual protest, in an attempt to demand accountability and transparency from the government on October 1 which marks the 60th independence anniversary of Nigeria.

In a post shared on her Twitter page, Una implored Nigerians to join her in demanding better governance come October 1.

The lady who is also a blogger has already displayed flyers for the protest on her page where she stated the mission and goal of the virtual protest.

She added that anyone who wishes to be a part of it must upload a one-minute video sharing their thoughts about the country and areas in which they hope to see improvements, using the hashtags, 'wearetired, wecandobetter'.

The young advocate told The ICIR that she desires for Nigerians to channel their inner patriotism and demand good governance from its leaders but wants them to do so in a civil manner.

“I know it's hard to be a Nigerian but I hope people can manage to be civil in this virtual protest. There are ways to be assertive without being insultive,” Una said.

While protests are a common thing in Nigeria and a necessity in every democracy, President Muhammadu Buhari administration has taken strict measures against critics both online and offline.

At different times in different states in Nigeria, police have clamped down and arrested protesters who have dared to resist unfavourable government policies.

Earlier in the month, Police in Lagos State reportedly arrested activists protesting against the recent hike in the pump price of petrol and electricity tariffs in the country.

Similarly, back in August, about 60 protesters were arrested in Abuja, after police took over the protest which was staged to demand good governance.