Indian farmers on the warpath, bristle at 'watershed' laws 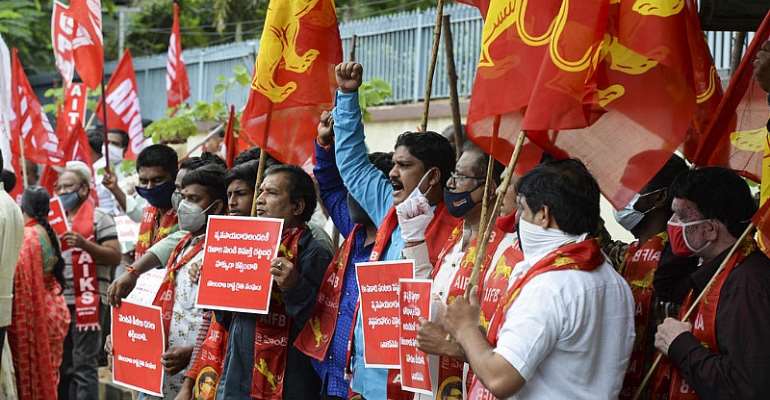 Indian farmers in their thousands led protests against new laws they fear will put cultivators at the mercy of wealthy businesses but the government called the reforms a "watershed moment" for the agriculture sector.

Farmers squatted on public highways in parts of India on Friday to oppose the legislations they said were injurious to the interest of the country's 119 million cultivators and 144 million farmhands.

Trains cancelled, highways blocked
Protest groups in Haryana and Punjab warned they would intensify the agitation in the coming days as thousands spilled out on the streets of the two northern states.

"I will do what it takes to save my farmers and my state from these dangerous new laws, whose implementation will cripple the farming sector and also destroy Punjab's lifeline of agriculture," he said.

Punjab and Haryana account for 37.8 percent of India's wheat and 25.5 percent of its rice production.

Protests were also on in several other states including in Bihar where 71 million voters were invited to elect a local government soon.

“The Indian government is only interested in fulfilling the interest of crony capitalists,” shouted state opposition politician Nawal Kishore at a rally in state capital Patna.

Police were also deployed on Delhi's borders to prevent protesters from swarming into the national capital from three nearby states.

Watershed moment: Modi
But prime minister Modi said there was an attempt to “mislead and instigate the farmers” as he praised the passage of the laws in parliament as a “watershed moment in the history of Indian agriculture.”

“People were taking advantage of farmers — that's why it was important to bring change in this situation,” Modi said.

Experts heap praise on the thorny laws
Some economists argued the reforms meant more cash for growers and designed to dismantle stifling controls on the farm sector, which accounts for 14 percent of the country's economy but for 42 percent of total employment.

Farmers would be now able to sell their produce in a market of his or her choice, added R.S Deshpande, former director of the Institute for Social and Economic Change think tank.

“It was long-pending reforms and Prime Minister Narendra Modi guts to do it”, he said.

Macabre farmland suicides
But suicide by farmers in India is also a regular occurrence which almost all state governments appear reluctant to even acknowledge.

As many as 42,480 cultivators and farmhands committed suicide in 2019, an increase of about six per cent from the previous year.

The deaths accounted for more than 23 percent of the total suicides in India, according to the National Crime Records Bureau.