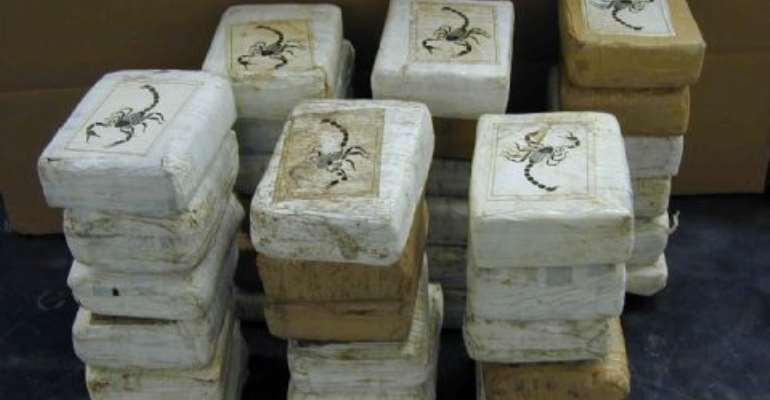 Information reaching newsmen in Accra has it that, the crackdown on major dealers of cocaine in the country has led to a sudden shoot-up in the price of the illicit product, due to the shortage caused by the resultant scarcity. The price of the narcotic drug, which sold at $16000 per kilo has shot up to $24000. The selling price of a similar quantity of the stuff in Europe is $30,000.

As a result, the profit margin of $6000 has made the trade in the illicit drug highly unattractive to the dealers, especially in the face of the many risks involved. It was also discovered that before the recent crackdown on suspected major sources, dealers paid $3,500 per kilo, at the transit points, especially at the Kotoka International Airport to those who aided them.

“If you buy the thing at $24000 per kilo, and you spend nearly $4000 to grease your way through, and then sell it at only $30,000 per kilo, wherein lies the sense in taking the risk?” our sources queried. When contacted for comments on the report, a source at the Police Headquarters explained that Ghana had become an attractive destination for smugglers from South America.

“Ships or vessels which approached Europe and America from South America were given extra, extra search, but those from Ghana and the West Coast of Africa were not,” said the source. Continuing he said this made the smugglers turn their attention to Ghana.

“Since the government intensified its vigilance and made arrests of seemingly 'big fishes' in the business, this seems to be paying off. $6000 profit is not attractive enough for all that risk and the product seems to be drying up over here,” he further explained.

Meanwhile, Daily Guide can report that not less than fourteen persons have been rounded up since the crackdown. These include a brother of the fugitive; cripple Darke Sheriff, who was arraigned before an Accra Tribunal last week. The man, Freeman Sosi, a watchman, was arrested earlier this week and has since made an appearance before an Accra Regional Tribunal alongside two other suspects, Evans Charwetey Tsekobi, a mechanic and Joseph Kojo Dawson, the owner of the MV Benjamin. They have been remanded in prison custody until November 2, 2006.

A very reliable source told Daily Guide that upon a tip-off, a vehicle believed to be owned by Sheriff Dake, was found parked in the house of the suspect. The number plates of the said vehicle were detached from the body at the time of the inspection. He was therefore arrested and charged with harboring a fugitive, as well as aiding and abetting a suspected criminal.

Additionally, Daily Guide gathered that the Attorney General's office is set to start in full swing, the cocaine trails which are currently pending before the courts. About a dozen suspects have been arrested and are currently in detention upon court's orders.

The others are Hlordzi Kwaku, a.k.a Aheys (one of the people who carted the cocaine from the boat to land, and who gave evidence before the Georgina Wood Committee), Freeman Sosi, a watchman and Evans Charwetey Tsekobi, a mechanic. Also in custody are Kwabena Amaning a.k.a Tagor, Issa Abass, Kwabena Acheampong and Moro Mohamed.

Furthermore, six policemen and a senior police officer are facing charges of aiding and abetting. These are ACP Kofi Boakye, who is on bail, and Detective Sergeant Samuel Amoah, who has since fled the country after being granted bail. The rest are General Daniel Nyarko, Detective Lance Corporal Dwamena Yabson, General Sergeant Isaac Asante and General Lance Corporal Peter Bordorin.

Meanwhile, an international search has been mounted for the crippled Asem Sheriff, Captain Hawk - captain of MV Benjamin, Chief Engineer Lee and Kwak Seong, also known as 'Killer'. When Daily Guide contacted the Attorney General's office yesterday, an officer, who would not be named, said the net is being widened to capture as many persons as possible, who were involved in the trade.

It would be recalled that two Venezuelans, who are connected with the East Legon cocaine saga, are in police custody, pending trial. They are Joel Manuel and Castillo, believed to be relations or friends to fugitive baron, Vasque Duarte.

My wife was pregnant – Husband of missing but found Takoradi...
28 minutes ago

I'm not bothered about a likely coup, I worry of possible up...
41 minutes ago