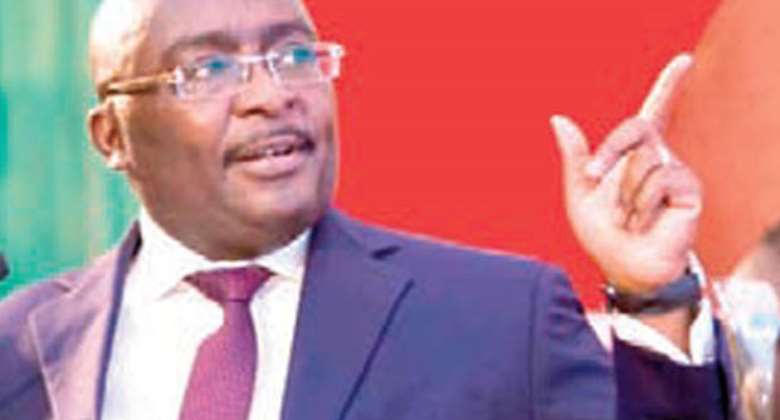 Vice President Dr. Mahamudu Bawumia has once again questioned the credibility of former President John Dramani Mahama as far as the Free SHS is concerned.

The former President was a fierce critic of the Free SHS policy when it was promised by then candidate Akufo-Addo, saying Ghana was not ready for it.

However, following its successful implementation by President Akufo-Addo, former President Mahama has now staged a u-turn, and is promising to expand it if he wins December’s elections.

But Vice President Bawumia has questioned the credibility and sincerity of Mahama over the policy, insisting he has no moral right to talk about its implementation.

Speaking in an interview with Nimdie FM in Sunyani on Thursday, Dr. Bawumia said Mahama’s promise to review the Free SHS implementation lacks credibility because he did not believe in it when President Akufo-Addo and the NPP dreamed brought it up.

“How can you say you will expand Free SHS when you did not believe in it?” Dr. Bawumia asked Mahama.

“Mahama said Free SHS is a hoax. He said it was 419 and he said it is impossible. But after President Akufo-Addo successfully implemented it for the benefit of Ghanaians, he is now going round telling Ghanaians that he will expand it to private schools if Ghanaians vote for him.”

“When Nana Akufo-Addo said he would implement Free SHS to make sure every child goes to school for free, Mahama told Ghanaians that it wasn’t possible and if he had GHC2 billion, he would not invest it in Free SHS.”

The Vice President urged the people of Sunyani and Ghanaians in general to ignore the inconsistencies of Mahama, and rather, rally behind Akufo-Addo, whom he said is the owner of the Free SHS vision and knows how to implement it.

Dr. Bawumia added that government has invested so much in infrastructure in the various schools in its quest to face out the double track system, which came about due to the overwhelming number of people who accessed senior high school nationwide due to the Free SHS.

He said some schools are already set to end the double track system from the next academic year.

The first batch of the Free SHS policy, who enrolled in September 2017, successfully wrote their final WASSCE exams earlier this month.

Dr. Bawumia is currently in the Bono Region for a two-day tour.